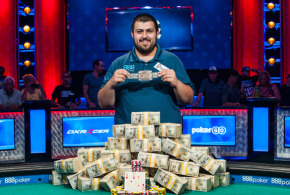 On July 22, a 25-year-old from New Jersey came from out of the blue to win the 2017 World Series of Poker. And Scott Blumstein is still recovering.

The Morristown native is no stranger to the winner’s circle. Last year, he bagged almost $200,000 in the 2016 Borgata Poker Open. But that’s small change compared to the $8.15 million Blumstein won at the final table of the Main Event, held at the Rio All-Suite Hotel and Casino Las Vegas, a Caesars Entertainment property.

He started early, playing Crazy 8s with his grandmother as a boy. He started playing in earnest at 18, the legal gambling age at the Turning Stone, a tribal resort casino in upstate New York.

“That’s the kind of love I had for poker,” Blumstein says. “Three or four times a year, I’d drive five hours into the middle of nowhere, just to be able to play.”

But it wasn’t until he reached 21 that he really upped his game, playing in Atlantic City’s casinos and online in New Jersey. We recently caught up with Blumstein at his modest digs in Brigantine, just across the bridge from the Atlantic City Marina District, home of the Borgata, Harrah’s and the Golden Nugget.

iGamingPlayer.com: How did it feel, the moment you realized you’d won the World Series of Poker?

Blumstein: It was just surreal, honestly. It happened so fast. I just showed up to play a tournament in a game I enjoy, and to be at the final table and win in that fashion was pandemonium. It was just how you’d picture it in your dreams, and really one of the best moments of my life.

In the final moments, did you have any sense that you were about to turn a winning hand?

It was the opposite. I just doubled (Ott) up in the hand before I made the play, but when it turned I didn’t feel that good about it, because I was behind. That’s what made it so shocking, how dramatic it was in the end.

Before winning the bracelet, you were a professional player but not a superstar. That said, you really went to Las Vegas with your game on.

I’ve played a lot around the East Coast, so people know me by face or name—it wasn’t out of thin air. My goal recently was to get as prepared as possible for a moment like that. All I can say is, if you’re going to play a tournament, you should prepare to win it. And that’s what I did.

It’s been said that Malcolm Gladwell’s 10,000-hour rule applies in poker—you’ve got to do something for 10,000 hours to get really, really good. Do you agree?

I don’t think I’ve put in 10,000 hours at the poker table, but sure, it applies in a broad sense. To be good at anything, you’ve got to put the time in. Though I wasn’t hardcore studying all the time, I was in the game for years.

How big a part does luck play in a skill game like poker?

The Main Event specifically is the least amount of luck. It’s not pure gambling, where you’re turning over the cards and running the board. And a lot of luck is subtle—how other people’s actions affect what you do.

I got very lucky where I would make a call on the flop, and then the turn in the river cards either helped me or didn’t hurt me by giving my opponents a better hand. I would always get the cards I needed to make the decisions I needed to make.

There’s certainly a lot of luck in poker, but the deeper you are, the more skill there is.

How do you keep your cool—and your poker face—in high-intensity situations?

One of the most important things in poker is the mental game. Keeping a straight face is something I learned over the years, and the psychology behind it is one of the most overlooked parts of poker. When there’s a lot on the line, it takes ultimate focus on the task at hand.

I wasn’t always the best at it, but I got better, and specifically in this tournament I was able to kind of clear my head and not think about anything else. I tried to hang in the moment and play my best game.

Playing online, on the other hand, I guess you can kick and scream and cuss all you want.

Yeah. Online, no one is watching. You can do whatever.

Are you always on the lookout for poker tells?

I don’t do a ton of that, honestly. For me, it’s more of an intuition thing—what other players are thinking rather than what they’re doing. It can come in handy when you can see someone who’s visibly nervous, and there are live tells, but I try not to use them or look for them too often.

What was your career plan before all this happened?

I graduated from Temple (University) with a degree in accounting. I like math, and though I’m not a math wizard by any means, it seemed like the choice for me.

Is there a cubicle or accountant’s desk in your future now?

Probably not. Honestly, when I decided to play poker professionally, it was because I didn’t really want to be an accountant! But, I would’ve gotten behind a desk if I didn’t succeed in poker.

There’s an aura around poker players—people think of Rhett Butler or Bret Maverick on a riverboat. Do you have to live up to that image and be good all the time?

The image comes with the game, but I don’t really have a big ego; I don’t even claim to be that great, honestly. While I’m confident in my poker abilities, I don’t think the perfect poker player exists. I’m not interested in living up to some expectation like that. I’m going to go out and be who I was before, a kind of a friendly guy, and if I do play, I just want to play my best and have fun.

Is there an essential guidebook that beginners should read?

I haven’t read it, but “Super System” is supposed to be a good start. It was written by Doyle Brunson, who’s considered the godfather of poker, though it may be a little outdated. Then talk to people that know more than you. And there are training sites that are helpful, too. But like anything, you can’t just watch. You’ve gotta study. And, the information is out there, it’s not a secret.

You won more than $8 million. I guess the IRS got a nice share of your stack.

Yeah. They did all right, too.

Will you continue to play professionally?

Yes, but I don’t think I’ll ever be a grinder again. I may play on the side instead of being a full-timer. I’m into sports, psychology—stuff like that. I don’t know where those two things will take me and I haven’t planned it out yet. I’m still kind of in celebration mode.

Speaking of celebrating, did you take a nice trip, buy a Learjet?

I didn’t really buy anything. I did get a new car.

A Ferrari, a Benz?

Wow, success hasn’t spoiled you. As for the fame aspect of fortune, have you heard from tons of long-lost high school friends or relatives?

That part of it wasn’t really bad. It was cool talking to people I haven’t heard from in a while. No one came too far out of the woodwork or bothered me too much.

You learned a lot playing online. Do you prefer cash games, online or live tournaments?

Live tournaments are my preference. Cash games too. Online has its benefits and perks, for sure, but I like to sit at the table be with people.

Finally, do you have any advice for the Scott Blumsteins of the future?

Keep playing. Work on your mental game. If you respect someone’s poker game, ask them to coach you. That may be the best advice of all. I wouldn’t be here without the help of people who showed me the way.