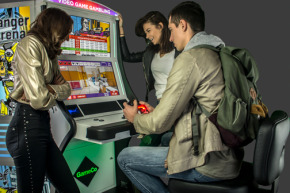 Startup gaming manufacturer GameCo has created next-gen slots for next-gen players. The company’s products are currently in the Tropicana Casino & Resort in Atlantic City, as well as at Foxwoods Resort Casino in Connecticut. Caesars’ Atlantic City properties recently removed the machines, citing low earnings, but Borgata is planning to add some of the games. GameCo’s suite of games could be the solution casinos have been waiting for—a way to attract, entertain and engage younger players, turning them into loyal, frequent customers.

iGamingPlayer.com: Can you describe the moment you realized your video game-style products were a good fit for traditional casinos? And how did you hook up with the casino operators?

Graboyes: As a producer, I was working with video game publishers and their eSports programs. We were bringing events to casinos and attracting thousands of gamers to each event. These gamers would walk right by the slot floor—slot machines weren’t exciting to people who grew up playing interactive video games. But clearly, gamers were attracted to the hospitality and VIP experience provided by casinos.

In meeting with casino executives, I learned about the challenges posed by slot machines: an aging demographic causing a stagnation or decline in slot revenues for many operators. This led to market research including a large-scale survey of more than 10,000 respondents and a week of Game Nights where we grouped attendants by their interest in casino games and video games. The results were clear: there was a massive opportunity to create casino games that appealed to a new generation of patrons who play video games.

Along with my co-founders, we developed a series of prototype games that we brought to casino executives and events such as G2E. Feedback was unanimously positive and reinforced the need for new types of “video game gambling” products in the regulated casino industry. Over the next two years, we continued to develop the concept and refine the product. In fall 2015, GameCo completed the first outside funding and within a year we advanced the first-ever skill-based Video Game Gambling Machine to release in Atlantic City.

Tell us about your expansion plans.

Graboyes: VGMs are currently in both New Jersey and Connecticut, with high-performing installations at Tropicana in Atlantic City and Foxwoods in Connecticut. In the coming weeks, we expect to announce added installations and deployment in approved jurisdictions across the country.

And business development is underway internationally as well, including in Latin America, Europe, and Asia. Given the worldwide appeal of video games, we expect approximately half of business in North America and the remaining opportunity internationally.

What’s the appeal of GameCo games?

We’re building games for all gamers.

Interestingly, these gamers are often already spending time at the casinos—in the nightclubs, bars, restaurants and other entertainment venues. But there are few offerings on the casino floor currently that appeal to generations that grew up with Xbox and PC games and smartphones. We bring a range of popular game genres, from core to casual games, to the casino floor in a format that allows real-money gambling.

To appeal to the largest possible audience today, our VGMs are single-player Class III games. In the future, GameCo will be releasing a Tournament Controller that networks and synchronizes individual VGMs to allow for competitive multiplayer experiences, similar to eSports tournaments. This will further bring together the trends of eSports and casinos in a format that can be operated in regulated, land-based casinos around the world.

What are your popular titles? Are there some cool ones in the pipeline?

Upcoming games include a similar range of game genres from fighting to sports to racing to puzzle games. These games will also bring massively popular brands to the casino, including a Terminator 2 first-person action game. Additional branded games will include Star Trek, Mission Impossible 2, and other popular entertainment franchises.

In the near future, GameCo will announce the first-ever AAA video game adapted for the casino environment. This will be the exact same game played on the Xbox or PlayStation that will now be available on the casino floor.

Do I need to be a video gamer to catch on and play?

Generally, our games are easily and quickly accessible to any player. However, some games are specifically designed to appeal to core gamers—such as our first-person action and fighting games. While the game design is easy to understand, the actual game controller is designed for a console gamer.

The majority of GameCo’s games use input devices such as touchscreen, steering wheel, and joystick controllers that are easily understood by all gamers. We make games that are easy to start, fun to play yet challenging for a range of players.

How do they compare to casino slot games?

GameCo’s VGM is built on an existing slot machine cabinet, which makes it a “plug-and-play” replacement for casinos to seamlessly leverage their existing technology infrastructure and service processes. Our VGMs uses a bill validator and ticket printer and allow for any player tracking system to be installed. The difference comes with the game experience. The VGM brings real video games to the casino floor with all the interactivity and engagement expected by gamers.

We’re seeing strong engagement from gamers of all ages who spend 20 to 30 minutes playing a VGM. This is definitely a younger audience than the typical slot player and presents a huge opportunity for casinos to develop incremental revenue on top of existing non-gaming and gaming revenues.

For more on the innovative “Video Game Casino,” visit gameco.com