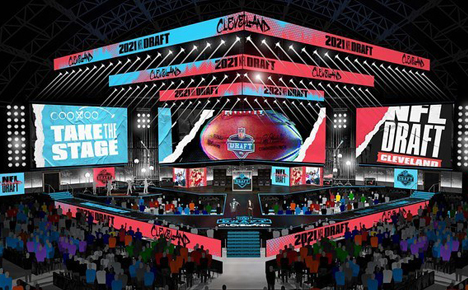 The NFL Draft is over, with plenty of winners and losers. Let’s see how gamblers did with prop bets, and how the picks factor into the season ahead.

AWith the NFL Draft behind us, it’s time for some Monday morning quarterbacking.

The 2021 draft saw plenty of winners and losers. But rather than rate how the GMs did, let’s look at how gamblers did with their proposition bets, then move on to the season. 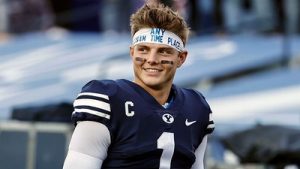 The second pick went to the New York Jets, who followed the script by grabbing BYU Cougars signal-caller Zach Wilson (l.). Wilson had odds of -5000 to go second, and Ohio State Buckeyes QB Justin Fields was at +900 to be taken at No. 2.

There were some surprises in the first round. The biggest: the San Francisco 49ers taking North Dakota State Bisons QB Trey Lance with the third overall pick. The 49ers had been rumored to be high on Alabama Crimson Tide quarterback Mac Jones.

So were oddsmakers, at least initially. At PointsBet, Jones was the favorite to go third at -300, while Lance went as high as +400. But Frisco was keen on Lance, and he dropped to -150.

There was still some value on Lance in another wager. He was listed on a prop bet at William Hill regarding which QB would be taken first. The choices were Jones at -400, Fields at +1200, and Lance at +376.

Reward yourself with Parlay Plus at BetMGM.com. Just opt in and place a 4-7 leg parlay on any combination of sporting events. You’ll earn up to 40% more on parlays. 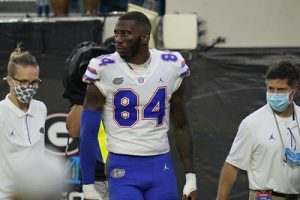 The Atlanta Falcons had the fourth pick in the NFL Draft, and early on were rumored to be looking to trade down with another team. When they couldn’t find any suitors, they went to Plan B.

Pitts is a once-in-a-generation talent. Dallas Cowboys owner Jerry Jones said he was “enamored” with Pitts. But with that team originally picking at No. 10, there was little chance the tight end would still be around.

BetMGM had Pitts as the favorite to go to Atlanta at -210, with Lance at +340 and Fields, +430. An underdog prop bet did pay off when Pitts was taken by the Falcons. The exact order of the first four picks had Lawrence, Wilson, Jones, and Pitts as the favorite at -135. When Lance was picked third, that order paid +360.

The selection of Pitts started a mini-run on wide receivers, as two were taken immediately after he was chosen. LSU Tigers wide receiver Ja’Marr Chase was selected by the Cincinnati Bengals with the fifth pick, and Alabama’s Jaylen Waddle went No. 6 to the Miami Dolphins. 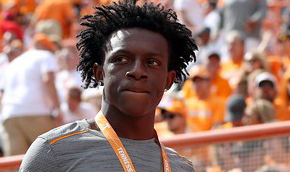 Offensive players were in demand in this NFL Draft, and it wasn’t until the eighth pick when a team took a player from the defensive side of the ball. It was a bit of a shock, too, when South Carolina Gamecock cornerback Jaycee Horn (l.) was selected by the Carolina Panthers.

Horn was a +190 pick behind Alabama cornerback Patrick Surtain II, the favorite at +110 at BetMGM. Surtain was the next pick by the Denver Broncos. If you wagered on a cornerback being Denver’s first pick, you were rewarded, as the prop bet paid off at +400.

There was another defensive player who had a large payoff for bettors. Penn State Nittany Lions linebacker Micah Parsons was +700 to be drafted first by the Cowboys. Dallas traded down two spots and took Parsons, addressing a desperate need on defense.

Watching the other two marquee quarterbacks fall was a bit of a stunner, but bettors made out if they took the over on their draft position. Jones, with an over/under of 3.5, fell all the way to 15th to the New England Patriots.

Register a new player account at WilliamHill.com. If you lose your first bet, you’ll earn a Free Bet in equal value up to $500! 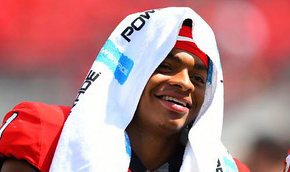 NFL Draft & the Future of Fields

The Chicago Bears haven’t had a dependable quarterback for years. They traded for one they believe will be a cornerstone of the franchise. The Buckeyes’ Justin Fields (l.) had an over/under of 7.5, but fell to Chicago at No. 11. Fields also paid +1000 to be the first pick of the Chicago Bears.

Fields might be the future, but it doesn’t appear he’s the present. Andy Dalton will start the season behind center. But the Bears got a boost in the Super Bowl odds. Before the draft, the team was +6600 to win the big game. After the draft, it went to +5000.

Chicago was one of several teams to see an odds boost from the draft. The team that made the biggest jump, according to BetMGM sports trader Seamus Magee, was the Broncos.

Since last Thursday, more than 40 percent of all bets have been on the Broncos to win the Super Bowl, Magee said. “BetMGM adjusted Denver’s Super Bowl odds from +6500 to +2000,” for the ninth best odds in the NFL.

Not everyone saw a drop in their odds in this NFL Draft. The Green Bay Packers are dealing with a disgruntled Aaron Rodgers (who may be wooed by Denver), and had a mediocre draft. The Packers odds went from +1200 to +1600.

Kickoff will be here before you know it, but the futures start now! Subscribe to iGamingPlayer below for the best in sportsbooks, promotions, action, and odds. Click here for the basics of NFL betting.

Want the Inside Trac