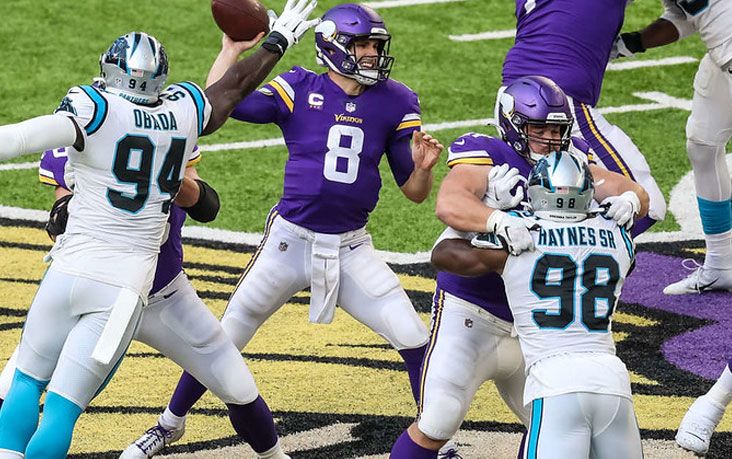 Quinton Mayo is all over the Minnesota Vikings (+100) at Carolina Panthers in Week 6 of the NFL season.

You know, sports gambling is 10 percent luck, 20 percent skill, 15 percent concentrated power of will, 5 percent—wait a minute, that’s Fort Minor’s hit single, “Remember the Name.” The math in that song is also very wrong, Mike Shinoda’s lyrics technically add up to 200 percent, but I digress.

Sports gambling has a lot to do with feel, in my humble opinion, and I don’t like to brag, but I have a great tingly sensation in my stomach when it comes to backing road dogs each and every week in the National Football League.

Without further ado, here’s my NFL Road Dog of the Week!

BetQL’s computer model analyzes every bet, every day to find mispriced lines! Be an informed bettor. Get started at BetQL today!

The Minnesota Vikings (+1.5) have been underdogs by 1.5 points or more two times this season and have covered the spread both times. They are 2-3 ATS this NFL season.

Alas, the day has come where I back Kirk Cousins and the Vikings. But what better moment to do so after an ugly win over the winless Detroit Lions at home? The name of the game is “value”! Minnesota closed as 10-point favorites against Detroit last week; this week sportsbooks are penalizing them for that poor performance.

The reaction is warranted, however—Minnesota blew a 10-point lead with less than 3 minutes remaining in the fourth quarter. Vikings running back Alexander Mattison, who’s done a terrific job filling in for the injured Dalvin Cook, had the ball stripped from him by Jalen Reeves-Maybin on a third-and-7 run from the Vikings’ 21-yard-line immediately following the 2-minute warning—mind you, Detroit had no timeouts remaining.

Three plays later, D’Andre Swift found the end zone with a 7-yard run and then Jared Goff connected with KhaDarel Hodge for the two-point conversion, taking the lead. Cousins came back and found his old pal Adam Thielen for a couple deep shots to get them into field-goal range and the rest was history.

It was ugly, but please remember this was the definition of a trap game for the Vikings. Two weeks ago, they beat Russell Wilson and the Seattle Seahawks outright as two-point underdogs to avoid a 0-3 start to the season. They came right back the following week and engaged in a defensive bloodbath with the Cleveland Browns in which both offenses averaged under 4.5 yards per play, finished with a combined 36 first downs and just three red-zone visits.

Getting Better All the Time 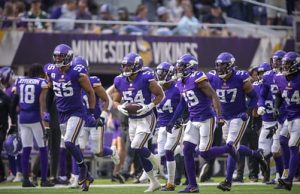 By the time Minnesota saw Detroit, they were gassed and attempting to reincorporate linebacker Anthony Barr (who looked rusty after returning to football for the first time in 13 months), and incorporating rookie left tackle Christian Darrishaw (who had two groin injuries in 10 months).

Those personnel issues won’t be as prominent this Sunday—Minnesota is finding ways to grind out victories while also getting healthier week-by-week. Scary stuff. The Lions are also a feisty, winless team that seems to truly buy into what head coach Dan Campbell is building in Detroit (3-2 ATS)—it makes sense that the game went the way it did.

Now, after a terrible loss to the Philadelphia Eagles, the Panthers are set to face-off against a Vikings team that could easily be 5-0 on the season, but at the end of the day are very battle-tested. Cousins and the offense have fared quite well this season, minus last week’s cool down, and will be looking to get back to their offensive prowess against a Panthers defense that showed some exploitable habits in the second half of their loss to the Eagles, but are otherwise a solid unit.

The Panthers defense looking lackluster in the second half is extremely pertinent for a Vikings offense that hasn’t scored a second half touchdown in four straight games. Cousins currently sits at 11th in the NFL with a 103.7 passer rating, throwing for 10 touchdowns, just two interceptions and 279.2 passing yards per game. The offensive line has also been excellent at protecting him this year, allowing just nine sacks in five games (tied for the ninth-fewest in the NFL). Wideout Justin Jefferson has shown no signs of a sophomore slump with 471 receiving yards on 33 catches, which ranks sixth in the NFL.

Click here for our recent coverage of the 2021 NFL season. 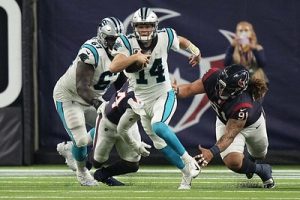 On the opposing side, Panthers quarterback Sam Darnold has shown significant regression without the ultimate security blanket that is Christian McCaffrey, who’s questionable to return this week from a hamstring injury he suffered in the team’s Week 3 victory against the Houston Texans.

After a stimulating start to the NFL season, Darnold’s Pro Football Focus grade has basically regressed back to where it’s always been—67.2. Darnold had just one interception during Carolina’s’ 3-0 start, but since then he’s had five in the two losses without McCaffrey. Darnold’s bad habits have started rearing their ugly head again. I think Darnold has more than enough to be a solid quarterback in this league for a very long time, but it takes a ton of reps to completely erase the quarterback we used to hear about (because nobody actually watched) in New York.

Sign up to wager at Golden Nugget, and your first deposit will be matched, dollar for dollar, up to $250.

If McCaffrey does return, that would be excellent news for the Panthers and their backers, especially as they take on a Minnesota defense that ranks 22nd in rush defense with 130.0 yards allowed per game. Whether McCaffrey suits up or not, Darnold will have his work cut out for him through the air as he faces a Top 10 pass defense, especially when they get to the quarterback. Minnesota ranks second in the league with 17 sacks and has 86 pressures, according to Pro Football Focus. Minnesota is also 6th in PFF grade and 8th in defensive DVOA.

I’ll elect to fade this Panthers offense, even if McCaffrey returns, until they put together the complete performances they were displaying earlier in the season.

Hop on this pick ASAP, because these odds won’t last long, trust me. Especially if McCaffrey is ruled out. Don’t be surprised if the Vikings turn into favorites prior to Sunday’s contest.

The Minnesota Vikings will play the Carolina Panthers Sunday, October 17 at 1 p.m. ET at Bank of America Stadium in Charlotte, North Carolina. Watch the game on Fox-TV.

Week 6: What the Sportsbooks Say

By consensus, here are the point spreads for Week 6 games per sportsbooks including BetAmerica, BetMGM, Caesars Sportsbook, PointsBet, SugarHouse (BetRivers) and Unibet:

Win a VIP Trip to Super Bowl LVI at Caesars Sportsbook! For every $10 bet on the NFL (min. bet $10, min. odds -200), you’ll be entered to win two tickets to the Super Bowl (flying by private jet), plus a two-night stay at a Caesars Rewards resort in Las Vegas.

Task Manager: One of