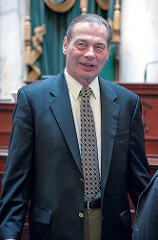 Rhode Island Senate President Dominick Ruggerio is promising to introduce legislation that will allow online sports betting at the state’s two casinos by next year. He said he is “optimistic” that his legislation will become law.

“If a bill on this issue is introduced, it will get a fair public hearing,” said the senator. If that happens Rhode Island would be the first state to have online sports betting.

Rhode Island Governor Gina Raimondo, beginning her second term, is concerned with the largest budget red ink since she took office: $200 million. She is anticipating the revenues from online sports betting and hopeful it will help fund an expansion of her “Rhode Island Promise” free college tuition program.

The governor told the Journal: “No one, including me, is going to get everything they want in this budget because we are confronted with fiscal realities and I am still committed to balancing a budget in a way that doesn’t raise broad-based taxes and that doesn’t affect eligibility for health care and that doesn’t jeopardize our economic comeback.”

Raimondo said she was open to online sports betting. This could be complicated by the fact that the state constitution requires a vote of the people for expanding gaming. Officials argued earlier this year that sports betting was an extension of existing gaming already allowed.

When they did so they noted that they might have to revisit that issue if they decided to expand sports betting online. The New York law firm of Boies Schiller Flexner has written the opinion that as long as the wagers are processed in the casinos that they should adhere to state law—and not need a referendum.

A spokesman for the governor said last week that state attorneys and outside counsel are developing analysis of the issues that would need to be addressed.

Said the governor, “Let me say this: I’d like to find a way to make it happen.” She added, “And the legal analysis is occurring to see what we can do without a referendum and what we would have to do with a referendum.”

Critics of the social effects of gaming are not happy about this development. They estimate the state has about 18,000 people with problem gambling.

Providence College Professor Patrick Kelly told WPRI, “In virtually every case that I’ve studied, it’s a tragedy. So, I’m in the tragedy prevention business.” He added, “If somebody can end up gambling on their phone, I think that’s a recipe for big time problems.”

Currently the state earmarks $125,000, or 1 percent of taxes on gaming, on treatment of problem gaming.

Supporters project that the revenues from sports betting could double, to about $50 million a year. This assumes that sports betting would be about $1.1 billion, with the state collecting about $80 million in taxes.

Ruggerio responded that about 97 percent of the sports betting currently is conducted underground, from which the state collects nothing and allocates nothing for treatment. . “I’m not overly worried about social issues because like I said, I think you have that going on without the state involvement. We’re not getting any revenue from that now,” he commented.

What Ruggerio is worried about is the lack of casino staff to take sports bets. He noted that lines are too long at both the Twin River and Tiverton casinos. He is happy that Twin River collected $170,000 in sports wagers the first day it was offer and that more than half of those players came from out of state.

A spokesman for Twin River said the casino is working to complete its sports book lounge which will have self-service kiosks and more terminals.