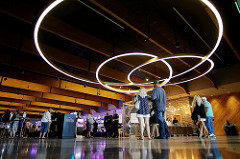 The Tiverton Casino Hotel opened over the Labor Day Weekend just across the state line from Massachusetts; with hundreds of patrons waiting in line many hours for doors to swing open at 10 a.m. on Saturday. The ribbon cutting actually occurred on Thursday.

The new $140 million 85,000 square foot casino on 21 acres has 1,000 slots, 32 gaming tables, dining and an 84-room hotel, and is expected to generate much needed commercial activity in the small town. It will employ about 600 workers. There is also a small racebook with 12 terminals. Sports betting may be added in a few weeks.

Twin River Management Group spokesman Patti Doyle declared, “I loved that moment when we opened the doors, and the staff was all here, from the president of the company on down.” She added, “There was obviously a certain sense of excitement and anticipation, and it’s nice that the day is finally here.”

The opening coincided with the closing of the Newport Grand after 42 years of operation, also owned by Twin River, which also operates the much larger Twin River Casino in Lincoln. Closing that casino two days before allowed the company to transfer its license 17 miles away to Tiverton.

For part of its history, before becoming a slots parlor, the Newport Grand offered Jai Alai. Arthur Paiva, who has come to the casino ever since it opened in 1976, told WPRI “I would come for the jai alai games. I said what the heck, I was here on the first day I may as well be here on the last day.” All 160 employees of the Newport were offered the option of working at the Tiverton casino; 141 took the offer.

Pearl Gonzalez, who used to go the casino on Friday nights, told the Newport Daily News, “Newport is going to miss the revenue.”

Sally Dwyer who had visited the casino since it was the Newport Jai Alai fronton, said “Jai alai was so much fun,” but when slots were added in 1992 she played them.

John Taylor, Twin River board chairman, commiserated with patrons of the old casino, and invited them to see the new one. “We have some players there who have been going there a long time who feel disappointed in the fact that we’re not going to be there anymore. But I hope and expect that once they see what we’ve done here, they’re going to love it and they’re going to enjoy it and feel comfortable coming.”

Twin River hopes to attract many of its players from Massachusetts residents living in Fall River and New Bedford.

Tiverton is a small town of about 15,000 that dates back to the 1600’s. It sits overlooking Narragansett Bay. The new casino doesn’t exactly scream “casino!” with its somewhat modest signs and architecture that blends in with the surroundings.

Joe Moore, vice president and general manager, told Casino City, “No, there’s no glitz and glamour here, and that’s exactly how we wanted it,” adding “Three years ago, when we had our original conversations with the people of Tiverton, there were worries about the casino having flashy neon signs and big spotlights all over the place. But we told them, that’s not us. That’s not what we want. That’s what we promised them.”

Moore added, “Tiverton is a convenience casino. It’s in a much more convenient location, just off the highway, and it’s on a significantly larger footprint. And we’ve added a hotel, which we didn’t have to offer to our guests in Newport . . . We’re confident we’ve given everyone involved exactly what we promised.”

The ribbon cutting came a month earlier than originally projected.

Bucking a trend among new casinos, smoking will be allowed throughout most of the Tiverton facility, courtesy of a high-tech ventilation system. The one exception is a glassed in area with 48 slot machines, and several food options.

Fine dining revolves around Chef Luciano Canova’s Trattoria Romana, but there is also the smaller Tuscan Chophouse, open on weekends. The casino’s center bar, which is located near the casino floor, aspires to become a popular local hangout, with live music, and a new iPourit system offering 24 taps, where patrons can serve themselves wine and craft beer.

The hotel lobby is just inside the casino’s entrance.

Doyle told the Providence Journal that Twin River has no “set projections or expectations.” “We just want to make sure that each and every guest who walks through these doors has a positive experience. The crew here, it’s all-hands-on-deck ready to receive guests all day and all night long.”

The casino was authorized by a statewide vote in November 2016 that coincided with a vote by Tiverton voters, who only narrowly approved it, by 400 votes. This followed a hard fought local campaign in which Twin River spent $4.6 million.

Doyle described it to the Providence Journal: “It was a very high touch campaign. We tried to reach as many Tiverton residents as we could, through social media, public information sessions, even backyard meetings.”

They asked residents what they wanted and in many cases factored their preferences into the final design.

This effort followed up the final efforts by Twin River to persuade the residents of Newport to authorize table games at the Newport Grand. When that failed, Twin River put all its efforts behind relocating and persuading both the state and the town to authorize them to do so.

No Tiverton Casino and Stop Predatory Gambling had nothing approaching Twin River’s resources to spend fighting the casino measure.

The casino will offer a self-exclusion problem for problem gamblers, who can ask the casino to kick them out for six months, a year, or even permanently.

In May Twin River sold the Newport Grand property to the Rhode Island-based Carpionato Group for $10 million. CEO and Chairman Alfred Carpionato declared, “This is a once-in-a-generation opportunity to creatively reimagine this signature property as the gateway into Newport.”

The day before the casino opened the Pocasset Tribe of the Pokanoket Nation and Twin River finalized an agreement on the casino’s use of land that the tribe considers significant because it was originally deeded to it in the 1660s. The tribe was later forced to move to land in Fall River.

The site, which was the location of a significant battle during King Philips War in 1675, is considered significant by the tribe.

Chief George Spring Buffalo of the tribe issued this statement: “Our history in Rhode Island is long and respected.” He continued, “The tribe itself has been a significant factor in the history of the formation of our country. There have been many books written about the Pocassets and its woman chief, Weetamoe, and all of the happenings surrounding the King Philips War, and our intent is to ensure that our culture and heritage shall be maintained in perpetuity.”

Under the agreement Twin River will erect and monument and fund a land trust for an undisclosed amount so that the tribe can buy land to reestablish its cultural heritage.

Patti Dolye, Twin River spokesman, said “We’re pleased to reach this agreement with the Pokanoket tribe with respect to land we purchased for the Tiverton Casino Hotel. Twin River undertook extensive archaeological and historical review of the land and we remain highly confident in its findings. We look forward to a continued good working relationship with the Pocasset Tribe of the Pokanoket Nation.”

Landowners near the casino are realizing something of a windfall with its opening. One restaurant owner told the Providence Journal, “It doesn’t get any better than this. It’s prime, prime, prime.”

About 15,000 vehicles are expected to drive by one intersection: William S. Canning Boulevard and Stafford Road. Add to that at least 3,000 visitors a day to the casino.

It will be remarkably easy to persuade DeMello to sell and relocate his business if the price is right. He already knows what the right price is: $1.9 million. Until he gets that price he will be making some extra money leasing his land to Twin River for additional parking.

A local Realtor, Carl Dansereau, who represents DeMello and other nearby landowners, estimates that parcels have quadrupled in value. He told the Journal: “We just think the whole area is going to be transformed into something better. A lot of people were against it but it will bring new businesses.”

The city where the old Newport casino, which has now closed, was located, now faces the obverse of that equation.

Start with the $800,000 that Twin River will no longer pay to the city of Newport. Mayor Harry Wintrop told the Newport Daily News, “It’s not catastrophic, but it’s not easy. In the short run, we are cutting some expenses, but we’ll have to work to replace those revenues in the coming years.”

Add to that the $311,853 in taxes the city collected last year from Twin River. The city began preparing for the losses by adjusting its $97 million budget.

City Manager Joseph J. Nicholson Jr. commented, “Is it concerning? Sure. But is it the end of the game? No. We’ve worked through bigger problems.”

The Newport Grand also employed 225 city and area residents. If it had persuaded voters in 2014 to authorize gaming tables, it estimated it would have doubled the number of those employed.