Raiders, Vegas Roll Up Their Sleeves 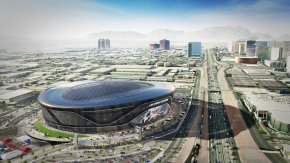 Executives with the Oakland Raiders were due to pay a call on the Las Vegas Stadium Authority this week to hammer out some crucial details for developing a new $1.9 billion home for the team somewhere near the Las Vegas Strip.

The Stadium Authority’s first meeting since the Raiders received permission from the National Football League to relocate to Las Vegas was expected to focus on completing a draft of a new lease agreement governing the team’s control and use of the 65,000-seat domed stadium, according to reporting by the Las Vegas Sun.

The first draft, unveiled back in January, wasn’t received so well. In it the Raiders offered to pay rent of $1 a year and claimed for the team decision-making powers over key aspects of how the facility would be used by the football team of the University of Nevada, Las Vegas―which proved a sore point for many in the Las Vegas community who view the school’s use of the venue as extremely important. The idea that UNLV is to play a pivotal role is enshrined in the state Senate bill that authorizes the sale of public bonds to fund $750 million of the stadium’s cost. The bill also specifies the lease must cover 30 years.

It also was a factor in casino magnate Sheldon Adelson’s decision to withdraw his support for the project. The billionaire chairman and CEO of Las Vegas Sands had pledged $650 million of his own money toward the stadium’s construction but pulled out after his negotiations with the Raiders broke down and the team presented the January draft lease reportedly without consulting him.

The Raiders have since announced that Bank of America has approved a loan to cover Adelson’s share.

The lease will cover other critical issues as well, including future capital improvements, rent payments, the use of suites and club seating, stadium naming rights, advertising and parking. It is, moreover, just one of a handful of agreements that must be achieved before the Raiders can break ground. The team has made it known it would like to do this on a 62-acre site just west of the Strip and Interstate 15 between Russell Road and Hacienda Avenue. But wherever the stadium is located, to stay on track for a projected 2020 opening, construction must begin by December to remain on schedule, and so a separate construction agreement must be negotiated and fairly soon.

A separate agreement must also be concluded that commits the Raiders not to leave town.

Then there is the all-important agreement governing the stadium’s shared use by UNLV and its Rebels football team.