HomeThe ShuffleRavens (+4.5) Receive Most Points All Season When They Visit Steelers

Ravens (+4.5) Receive Most Points All Season When They Visit Steelers 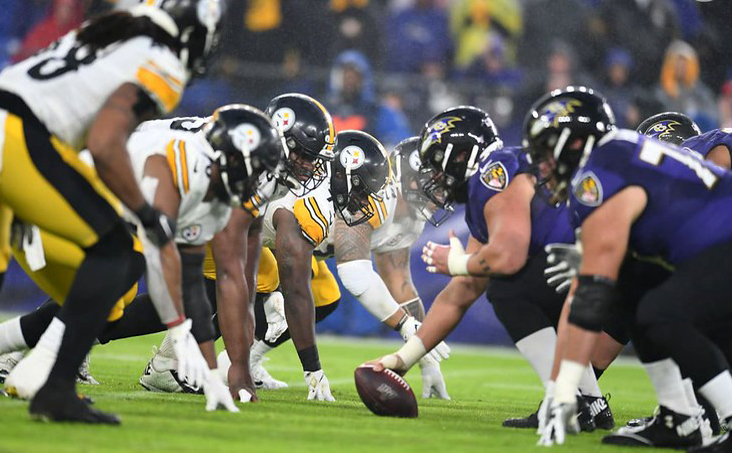 It’s one of the most storied rivalries in the NFL: the Pittsburgh Steelers and the Baltimore Ravens. Can Pittsburgh shake Baltimore again and continue its pursuit of a 16-0 season?

The Pittsburgh Steelers’ 12.4-point differential per contest is the largest in the NFL in 2020. This stat is everything in regards to why Pittsburgh has gone 8-2 ATS this season. At 10-0, the Steelers (+700) have interesting odds to finish 16-0.

The Baltimore Ravens have failed to cover in four of their last five, but their +4.5 line against the Steelers is the most points they’ve received ATS all season and equals the second time they’ve been underdogs.

The last meeting between these two teams saw the over hit by eight points. The 45-point over/under line is nearly identical to the 44-point line they saw last matchup.

The Steelers have endured a few close calls on their way to being 10-0. Over the past two weeks, Pittsburgh has won convincingly, outscoring the Cincinnati Bengals and Jacksonville Jaguars by a combined score of 63-13. They hold a 3.0-game lead over the Cleveland Browns in the AFC North and are close to locking up a playoff spot.

Offensively, the Steelers continue to look better each week. Diontae Johnson has been a revelation over the past month, and has put together consecutive 100-yard receiving games. At the same time, Chase Claypool has earned Ben Roethlisberger’s trust in his rookie season, giving the Steelers multiple receivers who can take the pressure off of JuJu Smith-Schuster. Equally important is the fact that Roethlisberger has been sacked just twice in his last five games. That’s a sign that the Pittsburgh offensive line is winning in the trenches. The only thing that’s missing is a consistent running back. James Conner had a strong performance last week, but his weekly production remains far too inconsistent.

Want to roster any Steelers or Ravens player in your DFS lineups? Get a 3-day trial on RotoQL to check out the projections at BetQL.com. In the past year, BetQL’s five-star (max-value) bets have won 61% of the time.

Of course, the Steelers are still setting the curve defensively. They’re conceding a league-low 17.4 points per game and have forced 12 turnovers in their last four games. That includes four turnovers against the Ravens last month. Even Pittsburgh’s run defense, which has been an occasional weakness this season, showed up last week to help the Steelers hold the Jaguars to just three points.

The Steelers’ 12.4-point differential per contest is the largest in the NFL in 2020. This stat is everything in regards to why Pittsburgh has gone 8-2 ATS this season. At 10-0, the Steelers (+700) have interesting odds to finish 16-0.

The Ravens are unquestionably in a bit of a tailspin. They lost in overtime to the Tennessee Titans last week, giving Baltimore their third loss in the last four weeks. That stretch has dropped them to 6-4 on the season, putting them third in the AFC North. The most shocking part is that Baltimore would miss the playoffs if the season ended today. However, their schedule is more than manageable down the stretch. But the Ravens can’t afford to keep spiraling out of control, making Thursday’s game close to a must-win situation.

For whatever reason, the Baltimore offense isn’t the dynamic juggernaut it was a year ago. Technically, the Ravens are the best rushing team in the NFL, but when you take away Lamar Jackson, they’re average at best. At the same time, Jackson and the passing game isn’t producing enough. He has a modest five touchdown passes and four interceptions over the last four games and isn’t getting enough from his receivers. Tight end Mark Andrews is now the team’s leading receiver, which is a testament to how much Baltimore’s wide receivers have underperformed this year.

As a result, the Baltimore defense has been forced to do more of the heavy lifting in 2020. Officially, the Ravens are ranked third in the NFL defensively, giving up 19.5 points per game, but they’ve allowed 23.8 points per game over the last five contests. The last matchup between Pittsburgh and Baltimore resulted in the over hitting by eight points. The 45-point line for Thanksgiving is nearly identical to the 44-point line they saw last meeting.

Up your win ratio! Get all your sports betting insights, info and odds at iGamingPlayer. Subscribe below.

This is bound to be another competitive and entertaining game between these two teams. Pittsburgh’s defense has figured out how to slow down Jackson and the Baltimore offense better than anyone, so it’ll be up to the Ravens to find a response, especially in the passing game. It’s also imperative that the Ravens take care of the football against the ball-hawking Steelers’ defense. Baltimore is unlikely to survive another four-turnover performance against Pittsburgh.

Again, the 4.5 points that the Ravens receive ahead of this battle is the most all season. Can the Steelers continue to cover at a high rate? This is a line to keep an eye on.

Tune in to watch the Thanksgiving Day faceoff between the Ravens and Steelers at M&T Bank Stadium in Baltimore. The game will be broadcast Thursday, November 26 at 1 p.m. ET. on CBS and fuboTV.com.

How to Think About t

Hop Aboard for New O