Rendell Distances Himself From Saipan 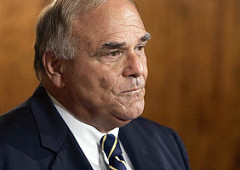 Former Pennsylvania Governor Ed Rendell has ended his involvement with a controversial new casino on the U.S. Pacific island territory of Saipan.

According to the Philadelphia Inquirer’s philly.com website, the veteran Democratic politico resigned from a $5,000-a-month job as a member of a politically well-connected advisory committee working on behalf of the Best Sunshine Live Casino.

Rendell’s decision came in the wake of reports that the operation has raised concerns among U.S. anti-money laundering authorities and is under investigation by the FBI in connection with allegations the casino’s owner, Hong Kong-listed Imperial Pacific Holdings, is illegally smuggling workers from China to build a permanent resort-scale casino on the island.

The temporary casino, which opened in 2015 with 16 VIP tables in a storefront between a laundromat and a cellphone shop, reportedly is taking in billions of dollar in wagers a month, mostly from Chinese high-rollers looking to avoid Macau and the scrutiny of Beijing’s widespread crackdown on corruption, graft and capital flight.

In 2015, the Tinian Dynasty casino on the neighboring island of Tinian, was fined a record $75 million by the U.S. Financial Crimes Enforcement Network for violations of federal anti-money laundering regulations.

CEO Mark Brown, who headed Donald Trump’s Atlantic City casinos for a time and served in the same capacity a decade ago with Las Vegas Sands’ burgeoning Macau empire,

maintains everything at Best Sunshine is on the up and up.

In explaining his decision to separate himself from the operation he said, “It’s too far away for me to effectively monitor anything that goes on. I’m taking people’s word for it, and that’s not a good thing. I can’t give them good advice because I’m too far away, and I can’t figure out what’s going on.”