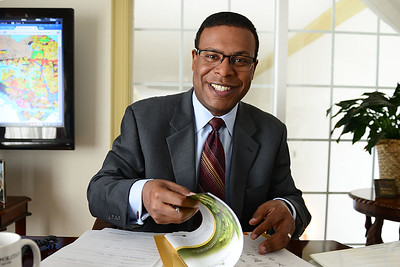 Due to the results of the recently released Virginia Joint Legislation Audit and Review Committee (JLARC), Norfolk Mayor Kenny Alexander (l.) announced that the state’s Pamunkey Tribe will seek a federally recognized tribal casino, not a commercial venue. The report's original estimates of a $700 million property with 3,500 jobs were scaled back to a $200 million property with 1,000 jobs.

At a recent public hearing, Norfolk, Virginia Mayor Kenny Alexander announced the Pamunkey Tribe would pursue a federal tribal casino rather than a commercial enterprise. Alexander cited the results of the Virginia Joint Legislative Audit and Review Committee (JLARC) report released last month as the reason for the change.

Originally, the city of Norfolk and the Pamunkey Tribe proposed a $700 million gaming property that would generate $825 million in annual revenues, with $33 million going to the city. The venue also was projected to create 3,500 permanent jobs with an annual payroll of $141 million. Instead, following the report, Alexander told those attending the public hearing the project more realistically would be valued at $200 million and create 1,000 jobs.

The agreement reached between the tribe and the city in September will be amended to reflect a lower tax rate than the 4 percent agreed to at the higher price estimate.

Councilman Tommy Smigiel said, “After the JLARC study and realizing that the scope of the project will change the commercial route it makes more sense for both the Pamunkey Tribe and the City of Norfolk.”

In September, the tribe agreed to pay almost $10 million to purchase 13 acres of waterfront property from the city for a casino resort on the Elizabeth River. At that time, the Pamunkey tribe had not decided if it would opt for a commercial or tribal gaming venue.

Immediately after the city approved the purchase, a group called Citizens for an Informed Norfolk started a petition drive to overturn the purchase agreement. The group said it questioned how the council went about the deal, and gathered enough signatures to force an eventual re-vote over the proposed casino.

Since then, the council voted to create a Mayors Committee on Gaming. The 11-member committee, including two council members, will study the impact of gambling on the city. Alexander said another goal of the group was to improve communication with the public.

Casino gaming still is illegal in Virginia, but a bill sponsored by state Senator Louise Lucas of Portsmouth would allow it in Bristol, Danville, Portsmouth, Norfolk and Richmond. If the legislation is approved, voter referendums would be held in each of those cities in November 2020.