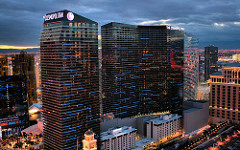 Hard Rock International is reported to be interested in acquiring the Cosmopolitan of Las Vegas, and, according to a popular industry blog, the interest has advanced to the due diligence stage.

The report on the pending deal is the second this year floated by Vital Vegas, a consumer-facing news and events site authored by Scott Roeben, who describes himself online as interactive marketing manager for the Fremont Street Experience and hosts a weekly gaming news and gossip segment on local CBS affiliate KLAS–TV.

His report, attributed to unnamed sources, was cited last week by Casino News Daily, a Europe-focused news and gambling website based in the UK, which said it “revealed that lay-offs were taking place at (the Cosmopolitan) and its credit lines were being reviewed to make it more attractive to a potential buyer.”

The 3,000-room Cosmo, whose 2010 opening was the last for a ground-up resort on the Las Vegas Strip, is owned by a division of private equity giant Blackstone. Blackstone bought it in 2014 for a reported $1.7 billion, and its interest in off-loading it is nothing new. James Packer was reported to be close to a purchase at one point. MGM Resorts International, which owns the surrounding CityCenter hotel complex, also was reported to have expressed interest.

As for Hard Rock, “While some would deem Hard Rock a surprising potential buyer, its rumored intention to expand its presence to the Las Vegas Strip might not be that unexpected,” Casino News Daily said.

The snag, according to a Vital Vegas tweet cited by CND, is an unspecified “union situation.”

The Cosmo’s initial ownership had shunned negotiations on a collective bargaining agreement with the Culinary Workers Union, the local affiliate of the Hotel Employees and Restaurant Employees International that represents most unionized workers in Las Vegas’ casinos. Labor relations were tense for several years until Blackstone stepped in and agreed to a four-year contract covering hundreds of food and beverage, housekeeping and other hotel workers.

Earlier this year, Cosmo was hit with a lawsuit by several manicurists formerly employed at the property alleging that management placed their health at risk by requiring them to work around dangerous chemicals.