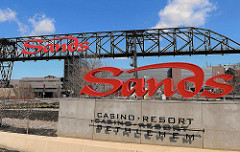 The New York-based investment firm that earlier this year reportedly made an offer of $225 million to buy Atlantic City’s shuttered Revel property has made is now planning to bid on the Sands Casino Resort Bethlehem, according to a report on the Lehigh Valley Live website.

According to the report, Keating & Associates LLC and its attorney, Brian Callaghan, are evaluating the Sands property, owned by Las Vegas Sands Corporation, and preparing to deliver a letter of interest in a sale. “As a company, we would be honored to have a jewel of a property like the Sands in Bethlehem within our portfolio, which is why we have initiated our evaluation process,” Jeffrey Keating, co-chairman of Keating and Associates, told Lehigh Valley Live. “The Sands is a wonderful property that we believe we can bring to the next level through programming and community activation.”

Although it has never officially acknowledged that the Sands Bethlehem property was for sale, negotiations for a sale to MGM Resorts International did take place, and ultimately broke down due to uncertainty with respect to bills in the Pennsylvania legislature to expand gaming.

The website reported that Keating could tender an official offer for the Sands within the next 30 days, although Sands spokesman Ron Reese told the website he had never heard of Keating and has not been contacted by the firm. That’s the same reaction given by Revel owner Glenn Straub when asked about the Keating offer for his property.

Sands Bethlehem had its best month ever in table-game revenue in September, its $22.7 million in revenue—a nearly 17 percent year-on-year increase—projecting it for the first time over Bensalem’s Parx Casino as the state’s highest-earning casino. Total gambling revenue for the month was $47.5 million, edging out Parx by only $59,000.