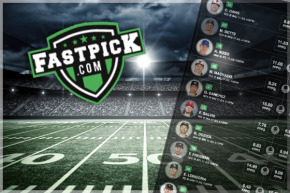 Say hello to a game-changer.

FastPick may do for daily fantasy sports players and Resorts Casino Hotel what the bump-and-run rules did to open up deep passing lanes to NFL wide receivers. It will open up the offense, or, in this instance, betting action.

The revolutionary DFS game debuted at Resorts in Atlantic City in mid-July and is being perfected for the NFL season launch. A full lineup of baseball, basketball, hockey and soccer, besides football, will soon be in operation.

FastPick enables DFS participants to wager online anywhere in New Jersey or at the iGaming Lounge at Resorts in Atlantic City. They can deposit and withdraw funds online, play for as little as $5 and oppose the house rather than seasoned, sharper opponents.

“It evens the playing field for someone who hasn’t got the time to spend hours and hours poring over their entries and balancing budgets,” Andrewes says. “We know that there are some players who are more professional, who have more time to play and even have their own software developed to give them an edge. FastPick appeals to the person who can’t do all of that. The beauty of what we offer is that everybody has a chance.”

FastPick can work like a parlay card, fantasy-football style. Results are determined by standard fantasy scoring. Players select winners of three or more fantasy matchups on a given day. They must hit them all to collect. Winnings escalate with more correct picks. You’ve seen this format at sports books on wagers linked to teams, like point spreads. The blueprint now enters the fantasy world, which is real and lucrative.

More than 50 million people wager billions upon DFS each year, and the professional sports leagues that once opposed DFS now welcome it like a visiting dignitary.

“We think about 60 percent of our business will come initially from pro football,” Andrewes projects. “The fantasy market is biggest in the United States, not as prevalent in Europe, because there are lots of other options for legal sports betting there. In the U.S., it’s an alternative in a way to sports betting (which faces constant legalization hurdles). It appeals to the same market, the same entertainment dollar.”

Andrewes brings sports-betting credentials to this role. He was responsible for all online products, including sports book and casinos, for Ladbrokes, one of the world’s leading betting and gaming enterprises. It is a market leader in retail bookmaking in the U.K., Ireland, Belgium and Spain.

Catering to “the little guy” is a noble approach and FastPick should find a fertile market. Yet, this does not suggest that big-money outfits like DraftKings and FanDuel aren’t fair. They initially surfaced as an alternative to the season-long fantasy-league grind, complicated by the injury factor. Players mired in the bottom of fantasy-league standings often stopped participating. The daily lineup, with cash prizes in the millions, was a genius innovation.

DraftKings does offer reasonable competitions for medium-sized players, like the 50-50s. The team finishing in the top half of the field wins cash no matter the number of entries. There are even beginner contests open to users who have not entered more than 50 contests or earned an experience badge.

Yet, when big money surfaces, so do the “sharks” who seek an edge. It’s human nature, everywhere.

Think of Carryover Pick 6s in the thoroughbred racing industry. When nobody succeeds at the complicated task of selecting winners in six straight races, most of the purse money carries over until the next day. The jackpot slowly escalates, often reaches millions and attracts groups of players when a mandatory payout occurs, usually the last day of the meet. Track officials relish the increased interest and multiple entries coming from groups, who inherently have a better chance to prevail than an individual player. The increased betting boosts track handle.

Daily lotteries sing the same tune. When the jackpot hits mesmerizing totals, multiple entries accelerate the skyrocketing total. Players are encouraged to bet more. It hardly matters that people with more entries have a better chance.

Fantasy leagues follow the same script. Players try to buy titles with multiple transactions, or make trades others would consider collusion. It’s difficult to find a totally fair fantasy world. The bigger the stakes, the more likely participants will play to the edges of the rules.

Against that backdrop, FastPick finds a niche. One can play casually, or seriously, online. Andrewes says NFL proposition fantasy bets will usually be listed by Tuesday each week of the NFL season.

Are you counting the days? The NFL season kicks off Sept. 7, when the Kansas City Chiefs visit the defending champion New England Patriots. A full weekend slate follows Sept. 10 and 11.

Tom Brady versus Drew Brees? Too early to know if that will be a prop, but not too early to think about it.