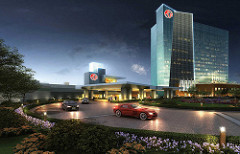 Set to open in March 2018, Empire Resorts is seeking to fill, 1,500 jobs at its $1.2 billion Resorts World Catskills Resort Casino, in Monticello, New York. The challenge, however, is finding qualified applicants in a county with only 1,600 unemployed people. Empire Resorts President and Chief Executive Officer Ryan Eller said, “We have to fill our pipeline with thousands and thousands of candidates to yield 1,400 full-time employees and another 100 part-time employees. That is a significant challenge. I think that we will be successful, because we’re going to have very compelling compensation. It’s going to be really solid, middle-class jobs.” Starting pay will be $40,000-$50,000 or more, depending on tips, Eller said.

Eller also noted 600 dealers will be required by opening day. “We’re going to start using more social media, more advertising to get the word out there,” he said. Dealer classes already have begun.

Located on the former site of the Concord Resort, Resorts World Catskills will offer a 90,000 square foot casino with 2,150 slot machines, 102 table games and a poker room, plus an 18-story, 332-room 5-star hotel, a golf course, indoor water park, pools, spa and fitness center, entertainment village, nature trail and dining options including a high-end Italian steakhouse and an Asian restaurant.

Resorts World Catskills is one of four non-Native American, Las Vegas-style casinos authorized by New York state after voters approved a constitutional amendment to expand gambling in 2013. Three already are operating in Schenectady, Finger Lakes and the Southern Tier, although gaming revenue has fallen short of projections. However, Eller said, “Those were regional casino properties, focusing on that type of business. Ours is something where we’re focusing on a destination resort that is anchored by casino gaming.” He noted, “The only way that you’re going to be successful is doing something different.”

Montreign is a wholly owned subsidiary of Empire Resorts, which also owns the Monticello Casino and Raceway. A joint venture company of Genting Berhad, Resorts World, has facilities in New York City, England, Malaysia, Singapore, the Bahamas and the Philippines; a new property also is under construction in Las Vegas.