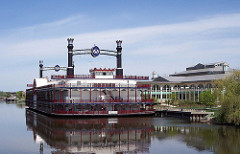 The Newport Grand casino, which first opened in June 1976 as a Jai Alai fronton and became a slots parlor in 2008, will close for good at the end of August. The license for slot machines will be transferred to Tiverton Casino Hotel along the Rhode Island border with Massachusetts. It is scheduled to open September 1.

Twin River is closing the old casino and opening the new one. The Tiverton facility will have 1,000 slots, 32 gaming tables, and an 84-room hotel, Italian restaurant, burger restaurant, pizza parlor and a Dunkin’ Donuts.

The decision to seek a new location was made in 2014, when voters of Newport voted down a measure that would have allowed tables.

The 23.5 acre Newport site has been sold to the Carpionato Group, for $10.5 million. Its plans for the land will include mixed retail, offices and possibly a hotel. Newport Mayor Harry Winthrop said it was unfortunate that the casino was leaving, but added, “We’ll have projects that will make the city proud.”

He noted that with it the casino is taking 500 jobs and the $4 million it was paying the host city each year. “Instead of gaining $4 million, we are losing $1 million, so it’s a $5-million swing,” said the mayor.