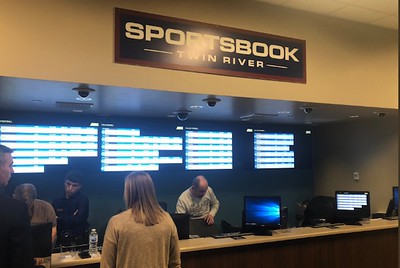 Rhode Island’s requirement that bettors travel to one of its two casinos, Twin Rivers (l.) and Tiverton, in order to finalize registering to use a mobile sports betting app appears to be hobbling the growth of the sportsbook. The growth of online sports betting is lagging behind that of brick-and-mortar sportsbook.

The rollout of Rhode Island’s mobile sports betting is lagging behind the bricks-and-mortar variety. Experts blame the requirement that players must register in person before participating.

In October the state’s sports betting handle grew 27.4 percent, to $28.3 million over the previous month. Although the mobile handle increased 78 percent over September to $5.9 million that was only 20.7 percent of the total, according to figures issued by the state. The month before mobile betting was 14.8 percent of the handle, according to the Department of Revenue.

Rhode Island has the example of other states that have successfully introduced mobile sportsbook apps to compare to. The most successful so far is New Jersey, where mobile wagering accounted for about 84 percent of the total handle in October. Pennsylvania wasn’t far behind with 82 percent in October.

The reason the Ocean state is lagging behind appears to be its requirement that players physically visit one of its two Twin River casinos, in Tiverton and Lincoln to activate their accounts after they have downloaded the app. This will be hard to change since it’s a requirement of the state constitution.

As of this writing, 17,199 patrons have registered their accounts with the Rhode Island Lottery. Of those, 7,834, or 45.5 percent, finished the process and activated their accounts at one of the two casinos. A similar percentage was reported in October.

Nor does an activated account equal wagers being placed. Of the active accounts, 37.4 percent had been funded to make wagers as of December 2, according to the Lottery.

Since the app went live in early September more than 485,000 bets have been placed. The average sized bet is about $19.

A third of those registering are residents of other states, led by neighboring Massachusetts, which doesn’t yet have sports betting of any kind. However, 73.7 percent are from Rhode Islanders.

Lincoln and Tiverton are both short drives from the Bay State border, and within an hour of Boston.