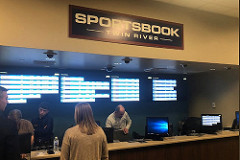 The Rhode Island Senate voted 31-4 last week for a measure to make sports betting on mobile platforms legal at the state’s two casinos. The measure now goes to the House.

Visitors to the Twin River casino in Lincoln and Tiverton now can make sports wagers on the premises. Under the bill players would be able to use apps and place wagers anywhere in the state, with locations being verified by geofencing technology. They would have to register in person at one of the two Twin River casinos for a mobile account.

This provision was included because some legislators had warned that expanding to mobile gaming would require an amendment to the state constitution and a vote of the people. It also avoids running afoul of the U.S. Department of Justice’s recent Wire Act opinion.

Senate Bill 0037’s sponsor was Senate President Dominick J. Ruggerio, who predicts sports betting will be good source of tax income for a state whose third largest source of government taxes is gaming. It could be used to fund “critical state services,” he said. He added that currently 97 percent of sports betting takes place illegally.

Ruggerio added, “Expanding to mobile gaming would provide a convenient option for those wishing to enjoy this form of entertainment, and open up the economic benefits beyond the walls of Twin River.”

Despite the lopsided vote there were opponents, such as Senator Sam Ball, who worried that it would create a monopoly on sports betting to the Twin River properties.

Once the House approves the measure it is likely to be signed by Governor Gina Raimondo, who has already included $3 million from sports betting in her proposed budget for 2019-2020.