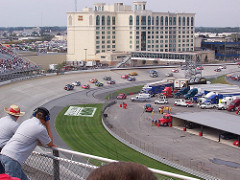 Deal solves problems for both operators

The parent company of Rhode Island’s Twin River Casino will acquire Delaware’s Dover Downs Gaming and Entertainment and its Dover Downs racino, in a stock-swap deal that will merge the two operators into a single public company.

Dover Downs, Delaware’s only public casino, has struggled for years to maintain profitability in the face of new competition in Maryland and Pennsylvania. The Delaware legislature just voted a major tax break for the state’s three casinos, which has led to Dover Downs embarking on construction of a new restaurant and other amenities. The casino hosted the start of full-blown live sports betting in Delaware in early June, beating New Jersey as the first state outside of Nevada with full sports books.

Dover Downs officials call the Twin River merger a new beginning financially, as the company has lost money two of the past four years, including a $1 million loss last year.

Twin River Worldwide Holdings is in the midst of a major expansion, including the opening of a larger casino, the Tiverton Casino Hotel, on September 1. It will simultaneously close the Newport Grand Casino in Newport, its former rival, which Twin River purchased in 2015. Twin River also owns the former Hard Rock Biloxi in Mississippi and a Colorado racetrack.

Twin River recorded around $427 million in revenue during the first quarter (two and a half times that of Dover Downs), completing a comeback after high debt forced a Chapter 11 bankruptcy filing in 2009. The operator’s flagship Twin River Casino, one of the largest in North America, is about to open an attached 136-room hotel.

The merger with Dover Downs is seen as a quick way to go public as the operator continues to grow.

Under the agreement, the two companies will exchange shares equal to 7.225 percent of equity in the combined company. The multiple investment firms that currently own Twin River will control 92.775 percent of the new public company. New York City-based Standard General is the largest of those firms, holding about 34 percent of Twin River.

The sale still must win regulatory approvals from the U.S. Securities and Exchange Commission and state agencies in Delaware and Rhode Island.

“Becoming part of Twin River will be transformational for us,” said Denis McGlynn, CEO of Dover Downs, in an interview with Delaware’s News Journal. “It will make for a more stable, stand-alone entity that will invest in our people, our marketing program and our facilities so we can compete at the highest levels.”

McGlynn said the merger will not impact employment at Dover Downs, which currently has a workforce of around 1,500, with another 300 employed by outside vendors. The company eliminated 72 table-game positions in 2015, trimming back weekday table operations. “We have no fat to cut, quite honestly,” McGlynn told the News Journal. “We’ve been operating bare bones for years. But we’ll have to see down the road what the synergies are.”

State Senator Brian Bushweller, who sponsored the recent tax break for the Delaware industry, lauded the move. “I view this as completing an excellent one-two punch,” he told the News Journal. “The first punch was correcting, to a certain extent, the level of tax the state imposed on the casinos. The second punch is merging Dover Downs with a larger organization that I think can bring a lot of stability, creativity and a bright future to Dover Downs.”

In an interview with the Dover Times, Twin River spokeswoman Patti Doyle said the merger is a good fit for both companies.

“The size of the combined company should bring meaningful economies of scale, likely in the areas of health care, insurance and food and beverage, and new opportunities for future expansion,” she said. “Further, the recent tax relief in Delaware, coupled with combining best-in-class management practices, will allow the combined company to reinvest in the Dover Downs property and drive revenue growth.

“The merger is expected to create a financially stronger company which is good for Dover Downs employees, customers, and the state of Delaware.”

“You’re going to see a company that’s better able to compete in this highly competitive gaming market in the Mid Atlantic,” McGlynn added to the Times. “You’ll see investments in our people, our marketing, and our facility. It will enable us to do much more to remain competitive than we would have as a stand-alone company.”

Pending regulatory and SEC approval, the merger is expected to close early in 2019.