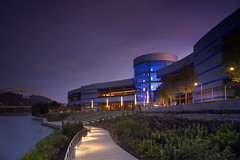 Rivers Casino (l.) in Pittsburgh is celebrating 10 years of operation, along with 10 years of progressive workplace initiatives that have won the property “Best Place to Work” awards and other accolades.

Rush Street Gaming and Walton Street Capital rescued a stalled Pittsburgh casino project from bankruptcy, rebranded it as Rivers and opened on August 9, 2009 with 3,000 slot machines, a handful of restaurants and a significant list of community commitments.

Ten years later, Rivers Casino Pittsburgh is among the city’s most vibrant and vital entertainment destinations thanks to continually expanding its value proposition and ongoing property-wide enhancements. “Time and time again, it’s proven to be a great place to work, a strong economic engine and a proud community partner,” said a press release from the company.

“A decade ago we saw great potential for Rivers Casino in Pittsburgh,” said Rush Street CEO Greg Carlin. “And we still do. The gaming industry is always evolving and increasingly competitive, and we’re committed to keeping Rivers Casino Pittsburgh at the forefront. We’re grateful to the community for its continued support.”

Rush Street Gaming and its affiliates own and operate Rivers Casino Pittsburgh, along with three other market-leading casinos in Philadelphia, Pennsylvania; Des Plaines, Illinois; and Schenectady, New York.

Rivers Casino General Manager Bill Keena said, “Rivers’ tremendous team members have been instrumental in advancing our shared vision. For example, we built and launched our temporary sportsbook in 43 days. And now we’re expanding with a permanent state-of-the-art sportsbook opening this fall, plus adding a hotel. Our team members move mountains.”

Rivers has celebrated its 10th anniversary all summer long with a series of anniversary-themed promotions, such as a $10,000 cash drawing, a $10 Monday-Tuesday lunch at the casino’s popular Grand View Buffet, $10 in free slot play for $10 donations to 10 local charities, and an anniversary weekend concert with Frankie Valli and The Four Seasons, Aug. 10 and 11.

Rivers’ approximately 1,700 employees have voted Rivers Casino a “Best Place to Work in Pittsburgh” and “Top Workplace” multiple times since opening. Rivers has lived up to its commitment to hire local, with 93 percent of its workforce from Pittsburgh and the surrounding area. Approximately 40 percent of Rivers’ total workforce are women, many in executive and management positions. And 33 percent are African American, Hispanic or Asian, comparing very favorably to the diversity of Allegheny County overall.

Approximately 164 employees have been with the casino since Day One, and Rivers has announced more than 1,400 internal staff promotions since opening.

Day One employees and their guests have been invited to a special 10-year appreciation and recognition dinner on August 13, during which Rush Street Gaming and property leaders will be on hand to personally thank them for their contributions.

Since opening in August 2009, Rivers Casino has generated more than $1.5 billion in total tax revenue for the city of Pittsburgh, Allegheny County and the state. Of that amount, $11.5 million has been distributed to Pittsburgh and Allegheny County libraries.

The Landing Hotel Pittsburgh, a $60 million privately funded addition that breaks ground this summer, is expected to generate approximately $10.6 million in new annual tax revenues for the city, the county and the state. The Landing Hotel will bring approximately 128 permanent new hotel and casino jobs, along with 1,400 temporary construction jobs. Local construction firm Massaro Corporation will build the hotel.

Importantly, Rivers has also contributed $75 million to fund construction expenses for the NHL Pittsburgh Penguins’ PPG Paints Arena to date, and will continue to pay $7.5 million annually through 2038.

Rivers Casino “Community Champions” volunteer more than 2,000 staff hours annually around town for painting shelters, riverfront cleanups and more. The casino chooses a monthly charity partner for featuring and fundraising on its gaming floor, and Rivers Casino’s leadership team is engaged on nonprofit boards of directors throughout the city.