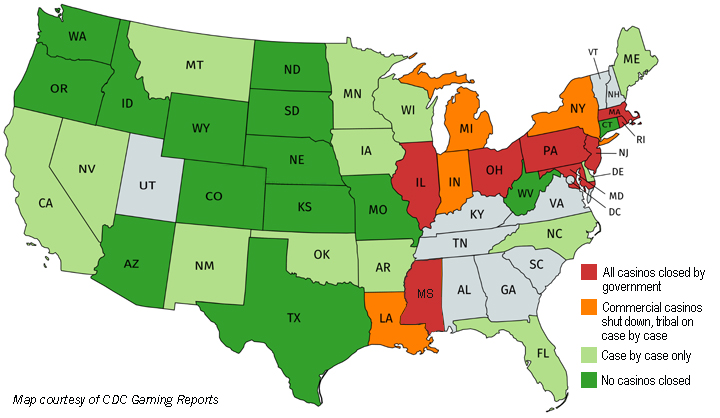 Las Vegas casinos begin to shut down, as governors order closures in New Jersey, Connecticut, New York, Michigan, Maryland and Louisiana. Tribal casinos across the country are evaluating whether to shut down or not. And in the Philippines, PAGCOR has shut down all casinos in the metropolitan Manila area.

While the coronavirus crisis has slammed share prices of public gaming companies, now the situation has worsened, with governors in several states ordering casinos in their jurisdictions to shut down.

The first closing in Las Vegas was announced late Sunday, when Wynn Resorts said it would shut down its Wynn and Encore casinos. The company said it would continue to pay its employees for the two weeks that the casinos will be closed.

MGM Resorts quickly followed, announcing it would close its 10 casinos on the Las Vegas Strip (as well as other casinos in Michigan, Maryland, Mississippi and Massachusetts). MGM Chairman Jim Murren explained the decision.

“As the coronavirus pandemic has intensified in the United States over the past week, the people of MGM Resorts have worked to try to find a way to continue delivering high-quality hospitality and entertainment experiences for our guests, while keeping our employees doing the jobs they love in a safe environment,” he said in a statement. “Welcoming people from around the world is what we do, and our employees have tremendous pride in their work.

“Despite our commitment to dedicating additional resources for cleaning and promoting good health, while making difficult decisions to close certain aspects of our operations, it is now apparent that this is a public health crisis that requires major collective action if we are to slow its progression.

“Accordingly, we will close all of our Las Vegas properties as of Tuesday, March 17th, for the good of our employees, guests and communities. This is a time of uncertainty across our country and the globe, and we must all do our part to curtail the spread of this virus. We will plan to reopen our resorts as soon as it safe to do so, and we will continue to support our employees, guests, and communities in every way that we can during this period of closure.”
MGM Resorts said it would pay employees for the first two weeks of the closure, and if layoffs become necessary, will extend health benefits through the end of June.

Las Vegas Sands, meanwhile, said its properties—the Venetian and Palazzo—would remain open, but would be flexible with employees who needed time off to care for children who are out of school due to the situation.

“The health, safety and livelihood of our team members and their families is our most important consideration right now,” a company statement said. “Our property remains open, and we will continue taking the recommended precautions necessary to keep our team members and guests safe. We will also be working with our team members impacted by the school closings in our community.”

“The company is not considering layoffs or any changes to any of our existing health care benefit plans. Our team members are our most valuable asset, and we have every intention of getting through this challenging situation together.”

Back east, the governors of three states—New Jersey, New York and Connecticut—have ordered casinos to close, along with restaurants, bars and movie theaters.

New Jersey Governor Phil Murphy, who only two days ago exempted casinos from closing because players could use “social distancing” to remain safe, reversed himself on Monday. He said the casinos would remain closed until it is deemed safe for them to reopen.

“It is no longer time for business as usual,” Murphy said. “This is real. Stop believing folks who say this isn’t real.”

While Connecticut Governor Ned Lamont said casinos would close in his state, he actually has no authority to close the two tribal casinos, because they operate on sovereign land.
Mohegan Sun says it’s closed large areas of the casino, but is in discussions with Lamont’s office about whether to close entirely.

“Working closely with and taking guidance from Mohegan Tribal Health officials and state and federal health authorities, while continuing to increase the overall safety of our guests and team members, Mohegan Sun today announces significant changes to our operations,” said Jeff Hamilton, president and general manager of Mohegan Sun. “These are difficult times the state and nation are facing, and as such, they bring about difficult decisions for Mohegan Sun and Mohegan tribal leadership.”

Foxwoods has also closed large swaths of its casinos, and is doing a deep clean on the portions that remain open.

New York Governor Andrew Cuomo has ordered the closing of all commercial casinos in the state, including the racinos in the New York City area. But as in Connecticut, Cuomo has no authority over the state’s tribal casinos, which are operated by the Seneca, Oneida and Mohawk tribes. However, those tribes have agreed to close down their casinos for at least two weeks.

“We know that’s where masses of people congregate,” she said. “There is a lot of close contact in a casino. I think that’s why it’s front and center in a lot of places across the country.”

While tribal casinos on sovereign land could make their own decisions, Gun Lake Casino in Wayland, Michigan actually closed prior to the order. Since then, some of the largest casinos have closed, such as Firekeepers, but the Pokagon’s Four Winds remained open.
Mississippi’s casinos will close at midnight on Monday until further notice. It’s not clear at this time whether the Choctaw tribe will close its casinos in the state.

Louisiana casinos were also closed for at least 14 days. The Coushatta Casino Resort will close for the same period, but it’s unclear if the casinos operated by the Tunica-Biloxi and Chitimacha tribes will follow suit.

In Alabama, the Wind Creek Casino closed for a full day on Sunday, but reopened Monday. The tribe said a deep cleaning of the property was conducted on Sunday after a guest who had visited Wind Creek later tested positive for coronavirus.

In California, where on Sunday the Pechanga and San Manuel tribes announced their casinos would close for two weeks, some other tribes decided to shut down as well. The casinos owned by the Chumash, the Table Mountain Rancheria, the Rincon (Harrah’s) and Yocha Dehe Wintun (Cache Creek) have all agreed to close.

The chairman of the California Nations Indian Gaming Associate, James Siva, commented on the situation.

“California’s tribes join the millions of Californians concerned over this pandemic, and are dedicated to implementing best practices to assist in containment,” he said.

The National Indian Gaming Commission (NIGC) noted that, even though tribal casinos are largely on sovereign land, they have regulatory oversight from the NIGC and their tribal gaming regulatory authorities (TGRA).

“The NIGC shares a common interest with tribal regulators in preserving the integrity of the Indian gaming industry,” wrote Chairman E. Sequoyah Simermeyer. “That common interest will continue to guide the NIGC collaboration with tribes as we monitor public health and safety threats.

Simermeyer says regular visits by NIGC staff to tribal gaming properties are under way to make sure those standards are being upheld and to collaborate with TGRAs to encourage best practices during this time.

All the casinos that remain open are using the social distancing principal. No table game has more than three seats, and slot machines are turned off so players will have some distance from one another.

After Philippine President Rodrigo R. Duterte declared Manila a quarantine zone, the Philippine Gaming and Amusement Corporation (PAGCOR) announced that casinos would be closed in the region for the next month. While it didn’t immediately extend to PAGCOR casinos outside of the Manila metropolitan area, experts expected those casinos to eventually shut down as well.

In Canada, all casinos were closed in British Columbia and Ontario.

in Australia, Crown Resorts and Star Entertainment casinos remained open but with the social distancing strategies.

All casinos were closed in Chile and in Germany, casinos in Lower Saxony, Bavaria and Baden-Württembergishe Spielbanken will be closed until the end of the month.