HomeThe ShuffleRoulette by the Numbers

Roulette by the Numbers 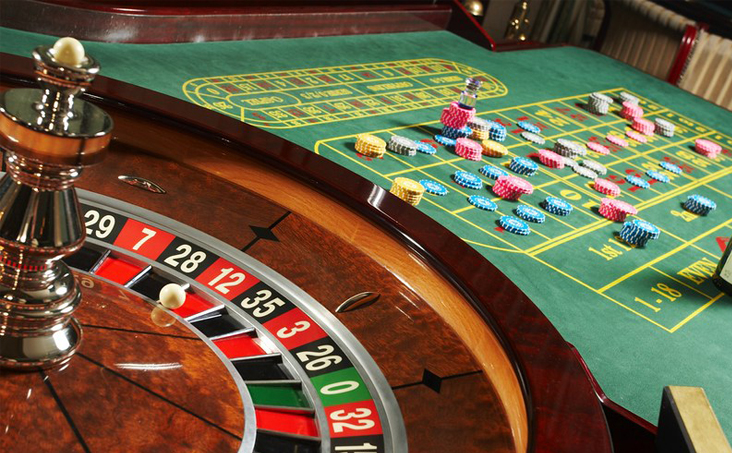 Roulette is a very simple game. But you’ve got to understand the numbers to win, and make sure your zeros are in place.

So, you want to play roulette? Before you get started, it’s essential to know how the numbers work.

Traditional roulette can encompass a table full of bets with up to 39 numbers. But the payoffs are usually the same. For a “straight-up” bet—that’s a chip on any single number—the player gets paid 35-1 if it hits.

Sounds like a great payoff, but let’s dig a little deeper.

In traditional American roulette, which has 36 numbers along with zero and double zero, there’s a possibility of 38 winning numbers. Suddenly that 35-1 doesn’t sound so great. And it isn’t. American roulette has some of the highest house-advantage bets of any game in the house. The overall house advantage on American roulette is 5.14 percent.

That’s pretty stiff, when you consider a basic strategy blackjack player gives away around 1 percent to the casino; the baccarat bank bet has a slim house edge of 1.06 percent, and betting the pass line in craps with 10-times odds is basically an even bet.

The best bet on roulette is the single-zero wheel, which pays 35-1 out of a possible 37 numbers, with a house edge of about 2.7 percent. So why would you play a game that gives away more than 5 percent to the house or even close to 3 percent?

The answer is simple because the game is simple. You don’t need a math degree to play roulette. It’s all laid out there on the table. You can bet lots of different things, but again with different odds. The red-black bets, the odd/even bets, the high/low bets, the columns and “streets,” splits and corners… There are plenty of bets at a roulette table and they’re easy to understand, but not easy to win.

Let’s review some of the history and background of roulette. Like many games, it has a French origin. Roulette means “little wheel” and was invented in the early 18th century in Paris. The wheel evolved until 1796 when a published report described the modern roulette wheel at a casino called Palais Royal. The wheel as described has the requisite 36 numbers, as well as a “0” and “00.”

In 1843, in the casino and spa town of Bad Homburg, Germany, the single-zero roulette wheel was invented, today known as “European” roulette despite the French roots. And today, that version of roulette remains the most popular casino game in Europe.

Then the double-zero wheel arrived on the riverboats of the Mississippi, and later moved to Cuban and Nevada casinos. While still lagging behind blackjack, in the past few years roulette has surpassed craps in popularity. But it could surrender to baccarat as that game acquires more devotees.

A new triple-zero wheel debuted a few years ago at the Venetian in Las Vegas and has since spread to several other Strip casinos. The novelty of the new variation sometimes fools players into not recognizing that it’s actually a bad bet. Some people see it as another chance to win, when it actually decreases your chance to win.

Despite its relative simplicity, for hundreds of years roulette has been a target for players wanting a fool-proof winning system. Some of these systems were designed to negate the hefty house edge and turn roulette into a money machine for the smart gambler.

Of course, that never happened. It was just another example of the “Gambler’s Fallacy”—a belief that just because one event occurs more often than normal, such an event will continue to appear in that frequency. It never does.

The infamous “Martingale” method was one simple system that falls apart quickly whenever it’s applied to any casino game, and roulette is no different. In Martingale, the bettor doubles his bet after each loss in search of single-unit wins. But of course, this system will eventually hit the game’s upper betting limit, which will destroy any system.

For a while, the Labouchere System held some promise. Since it didn’t demand the dramatic double-up requirement of Martingale, it changes the bet size after a win or a loss. The player crosses off numbers as they come up and hopefully can take advantage of the random way of numbers appearing. But again, the system runs into insurmountable challenges and Labouchere has a negative expectation.

You may have heard tall tales of players beating roulette on a regular basis. While you can’t discount those stories, they are more likely caused by an error in the wheel rather than a successful system.

People who have reportedly beaten roulette have done so by identifying a “biased” wheel—that is, a wheel that may be unevenly worn on its axis, allowing certain numbers or groups of numbers to appear more frequently than others. The only way to do this in the past was to physically sit at a table for a long time to determine whether numbers come up more often than would be normal.

Others have built computers to track a wheel, but computers aren’t allowed in a casino. Even cell phones are frowned upon at a roulette game because of their computer capacity to track a wheel. A London casino was beaten pretty soundly in the early ‘90s by a player using a cellphone camera to track the wheel and discover a hefty bias.

Today, casinos are well aware of the dangers of a biased wheel. It would be rare for players to identify a biased wheel before the casino itself realizes it might have a problem.

And there are now many electronic roulette games that players can enjoy, with amazing graphics and special betting options. Some of these electronic versions actually have real wheels with real balls that are activated electronically when “no more bets” is announced.

So, there are fewer “live” roulette tables to enjoy—or to gain an advantage over the house.

Play roulette at VirginCasino.com and you’ll be eligible for $100 in real cash back. Sign up today! Terms and conditions apply.

For the online player, roulette has a lot of different varieties. Unlike most casinos, which usually only offer American (double-zero) roulette, most online casinos can offer all different versions. In fact, there’s one casino (CaesarsCasino.com) that offers 100-to-1 roulette that uses the numbers 1 to 100. While it sounds good, once again, it’s a bit disguised, as the house advantage ranges from 3.8 percent to 7.2 percent.

Caesars also offers a 3 Wheel roulette game that allows players to place a bet on any of the three wheels and some side bets that represent things like three of a kind (numbers, colors, odd/even, etc.), zeros, straights, pairs, or any other combination. The house edge starts at 2.7 percent and climbs from there.

Do you prefer the “live” version of roulette? Well, playing online doesn’t preclude you from enjoying the attention of a dealer. “Live” dealers can be found at HardRockCasino.com, GoldenNuggetCasino.com, and BorgataCasino.com and the live tables include the favorable single-zero European wheel as well. Sometimes the minimums are higher than on a double-zero wheel, but not as much. And the minimums are really “minimum.” Some American roulette tables are as low as pennies and the European wheel can start at a dime. So most players can afford that level.

Because almost all legal online casinos in New Jersey and Pennsylvania offer European roulette, and because it offers the best odds with a house edge of just 2.7 percent vs. the 5.14 percent for the double zero wheel, there really is no excuse for anyone to play American roulette (or it’s hideous stepsister, triple-zero roulette).

It’s also best to avoid those “customized” roulette wheels with bonus bets. There’s no reason to get involved. There are so many different bets on a traditional roulette games, bonus bets just aren’t necessary for a wheel game.

Enjoy yourself but get the best of it while you do.

Sign up to play online at TropicanaCasino.com, and get up to $100 cash back—that’s real cash, not bonus dollars! Terms and conditions apply.