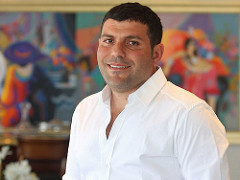 Playtech’s founder Teddy Sagi has sold his about 4.8 percent stake in the gambling software company for about $87 million.

Sagi’s Brickington Trading has sold about 15.2 million shares, equivalent to 4.8 percent of the London-listed company, his family office, Globe Invest, said in a press statement.

The stock that the Israeli entrepreneur sold is worth approximately 68 million pounds ($87.2 million) at the current market price of about 450 pence a share, according to a report by Reuters.

Sagi founded Playtech in 1999 and the company began trading on the London stock market in 2006.

SpringOwl’s founder Jason Ader told Reuters in September that he wanted Playtech to sell its financial services businesses and focus on gaming.

“I don’t have a sense that the future of this company includes Teddy Sagi,” Ader said at the time.

In another matter, Playtech announced it will extend its long-term partnership with Fortuna Entertainment Group , the largest betting & gaming operator in Central and Eastern Europe.

The new agreement will see Playtech’s IMS player management platform become the core platform used by all FEG brands across the Czech Republic, Slovakia, Poland, Romania and Croatia, the company said in a press release.