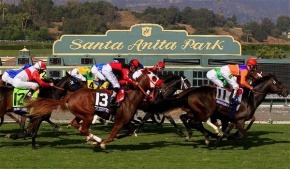 Triple Delight awaits horseracing fans April 7. Three major Kentucky Derby prep events provide a sneak peek at the May 5 Run for the Roses. Witness the $1 million Santa Anita Handicap from California, the $1 million Blue Grass Stakes from Keeneland in Kentucky and the $750,000 Wood Memorial from Aqueduct Park in New York. All are 1 1-8 miles, just a bit short of the 1 1-4 mile Kentucky Derby and will put a spotlight on the contenders.

What to look for? You want to assess which horse runs strongest in the last couple furlongs, which competitors show mettle in the midst of stretch duels and which seem to be rounding into form. Comparing the final quarter-mile for all the winners is also useful, and fun. A horse with a dull finishing kick will be tested even more with the Derby’s added distance.

With all three events at the same distance, the fastest time is a good thing to value. The prep races also present a sense of race conditions, traffic, even a weak ride from the jockey. Should rain enter the forecast, one can see which horses can handle the “slop” of a wet track, as Always Dreaming needed to do in winning the 2017 Kentucky Derby.

The gap between April 7 and May 5 should be perfect for Derby horses, as it is an excellent dress rehearsal for those entered. The prep season concludes with the $1 million Arkansas Derby April 14 at Oaklawn Park.

Host tracks on April 7, meanwhile, load their supporting cards. Each features more than $1 million to anchor the main attraction.

Serious players can create their own super card April 7 by playing the dozen or so races with purses of $100,000 or more. Some of the best horse racing has to offer will be displayed.

This has been a fascinating NHL season because of the changing of the guard. The Chicago Blackhawks, who won three Stanley Cups in five years, are out of the playoffs. The long-suffering Winnipeg Jets are in and the expansion Vegas Golden Knights have become the sport’s ultimate Cinderella team. They were a 125-1 pick to win the Cup back in October, but 7-1 in late March.

Handicapping the NHL playoffs that start April 11 is tricky because there is a smaller talent drop-off than with many other sports. Futures wagering food for thought: No team has won the Cup without scoring at least 100 regular-season points the last four years, and the first playoff round often features an upset. Teams capable of winning the Cup, but not getting betting support include the Washington Capitals at 15-1 and the Philadelphia Flyers at 25-1.