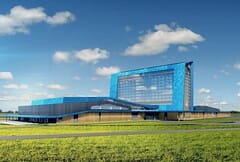 Quapaw Nation Chief John Berrey said a former truck stop will open as a casino annex to the $100 million Saracen Casino and Resort (l.) in Pine Bluff, Jefferson County, Arkansas in two months. The casino will open in April 2020 and the hotel in October 2020.

In Pine Bluff, Jefferson County, the Quapaw Nation’s $100 million Saracen Casino and Resort is under construction, and the Southern Edge truck stop is being transformed into a casino annex.

Quapaw Chief John Berrey said, “We are moving forward, and it is awesome to be able to do so. There is work being done on both sides of the road, but it is probably more obvious at the store. We expect the truck stop to be back in service here in just a few weeks.”

Berrey said the casino annex won’t be ready to open for at least two months. “We wanted to focus on getting the truck stop back open. We have interviewed people who lost their jobs when it closed, and we are excited that some of them have jobs from us and will be a part of the family,” he stated.

The tribe’s business arm, Downstream Development, received its gaming license from the Arkansas Racing Commission on June 13 and ground was broken that same day.

Berrey added, “I am super-excited for the people of Jefferson County, the people of Pine Bluff and my tribal nation. It’s really a game changer for all of us. We are all going to work together to do it. There’s just a feeling of excitement in Pine Bluff today and a feeling of hope. That is a good feeling, and we are happy to be a part of that.”