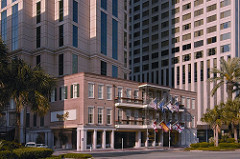 Harrah’s New Orleans Casino officials want to invest $340 million to build a second hotel with restaurants and a nightclub next to its current downtown facility which includes a 450-room hotel. Approval would be required from the state legislature, the governor and the city.

State Rep. Walt Leger III said, “There seems to be a lot of support. It seems that it’s a win-win.” State Senate President John Alario added, “It will be a big plus for New Orleans and the state. But I’d like to know what else is involved. I just want to make sure the state’s interest is protected. I always like to see the fine print.”

Actual legislation has not as yet been introduced, but House Speaker Taylor Barras indicated that he plans to sponsor the measure.

Harrah’s said the 24-story, 340-room hotel would be built on the site of the casino’s main entrance, across Convention Center Boulevard from the former World Trade Center building, currently being converted into a Four Seasons Hotel. Officials said it would be a luxury hotel with a rooftop pool, gym and 20,000 square feet of meeting space.

Harrah’s Regional President for the South, Dan Real, said the company also wants to build a clear roof over the closed-off section of Fulton Street between the hotel and its parking garage fronting Convention Center Boulevard, to allow “year-round outdoor entertainment.”

Company officials added the project would create 600 construction jobs and 500 full-time jobs, generating for the state an additional $13 million annually in gambling taxes and hotel and sales taxes, and $8 million in increased rent and property tax and sales tax payments to the city.

To encourage New Orleans officials to approve the hotel, Harrah’s representatives said the company would guarantee paying for police and fire services provided to the casino for the next 10 years, totaling about $3.6 million a year.

Outgoing Mayor Mitch Landrieu is reviewing the proposal, a city spokesman said. Mayor-elect LaToya Cantrell said she “looks forward to continued conversations with all interested parties in regards to the potential project.