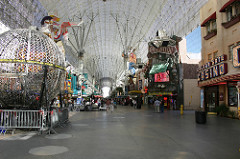 The Fremont Street Experience has begun installing new security barriers to protect the Downtown Las Vegas pedestrian mall from motor vehicle attacks like the ones last month in Barcelona, Spain, and Charlottesville, Va., that killed 15 people and injured hundreds.

Entrances to the busy thoroughfare have been fortified with yellow K-Rail barriers in a speed-up of new permanent features that already were planned, according Fremont Street Experience President and CEO Patrick Hughes.

“We’ve been working with the city for quite a while to determine what kind of security features we should put in. In light of recent worldwide events, we decided to escalate that process,” Hughes said. “We’ve implemented a three-phase plan to protect the area. It’s our job to protect our tourists.”

The city supplied the barriers, which were installed at Fremont Street and Main Street, on Las Vegas Boulevard and behind the Fremont Street Experience stages. A number of barriers also were reported at Third Street near Ogden Avenue.

Metal posts already line the sidewalks where streets cut through the five-block mall.

“We really wanted something that was impenetrable,” she said. “They’re very, very heavy. You can’t get anything through.”

Clark County is also expediting new security features along the Las Vegas Strip. Around 700 steel bollards are due to be installed by early October along sidewalks from Tropicana Avenue to Spring Mountain Road.

In December 2015, a car plowed through a crowd of pedestrians on the Strip, killing one person and injuring 35 others.