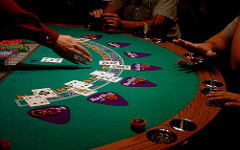 The new deal gives the tribe continued exclusivity under the original compact, which expires in 2030. The tribe will resume payments immediately. Including payments made in escrow, the state will receive $340 million over the next fiscal year. The catch, however, is the state is required to take “aggressive enforcement action” on banked card games and even electronic table games that mimic the real thing. Should that not happen, the tribe can halt payments once again.

The Florida Department of Business and Professional Regulation says it will abide by the agreement.

“DBPR is glad that the state of Florida has reached an agreement to resolve the ongoing litigation between the state and the Seminole Tribe,” said DBPR Secretary Jonathan Zachem. “This agreement ensures the continuity of the current Seminole compact and does not allow for any expansion of gaming.”

The challenge for the parimutuels is great since the money paid by the tribe is at least twice as much as the banked games would contribute to the state treasury.

The tribe says it’s a win-win for everyone, however.

“The settlement is one of the rare incidents where everybody benefits,” Barry Richard, attorney for the Seminole Tribe told the Miami Herald. “Nobody gave up anything. The state has an immediate infusion of money, and the tribe gets to continue its games.”