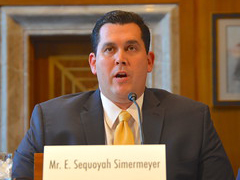 Senator John Hoeven, chairman of the Senate Committee on Indian Affairs, announced last week that the committee has approved the nomination of E. Sequoyah Simermeyer (l.) to serve as chairman of the National Indian Gaming Commission (NIGC). The nomination now must be approved by the full Senate.

Senator John Hoeven, a North Dakota Republican and chairman of the Senate Committee on Indian Affairs, announced last week that the committee has approved the nomination of E. Sequoyah Simermeyer to serve as chairman of the National Indian Gaming Commission (NIGC).

“The committee unanimously voted to confirm Mr. Simermeyer, a member of the Coharie Indian Tribe of North Carolina to serve as chairman of the National Indian Gaming Commission,” said Hoeven in a statement. “Given his legal background, work experience, and current position at the NIGC, Mr. Simermeyer is well qualified for this appointment. I look forward to the moving his nomination to the full Senate for confirmation.”

On his nomination by President Donald Trump in June, Simermeyer received endorsements from many quarters including Interior Secretary David Bernhardt, who called him “the ideal candidate… I urge Congress to confirm him quickly.”

Earlier in his career, the nominee was counselor and deputy chief of staff to the Department of the Interior’s Assistant Secretary for Indian Affairs. He was also counsel for the Senate Committee on Indian Affairs.

Simermeyer is a graduate of Dartmouth College, Vermont Law School and Cornell Law School. Oklahoma attorney Gary Pitchlynn told Casino.org that the NIGC chairman “sets the tone for the relationship of the commission with tribes while policing the industry” and has “significant authority” under IGRA as the “first-line decision maker” in enforcement actions. He said Simermeyer “has a great deal of experience working with Congressional staff and tribes and can provide strength and credibility to the commission’s relationship with both.”

Colorado attorney Rory Dilweg said Simermeyer “has always been a fierce and compassionate advocate of Indian tribes. I expect he will remain so in his new position as chairman even while he must uphold the letter and intent of the Indian Gaming Regulatory Act.”

The NIGC oversees some 512 tribal gaming venues operating in 29 states. There are 114 full-time employees who work out of seven regional NIGC offices. The commission’s budget was about $25 million in the 2019 fiscal year. Its operations are funded through fees paid by tribal gaming operations.

If approved by the full Senate, Simermeyer will succeed Jonodev Osceola Chaudhuri in the role. Chaudhuri, a member of the Muscogee (Creek) Nation, left to become chairman of the Indian Law and Policy Group at Quarles & Brady in Washington, D.C.

The NIGC has jurisdiction over 512 licensed gaming establishments operated by 246 Indian tribes in 29 states. In fiscal year 2017, tribal gaming revenues reached approximately $32.4 billion. The commission currently has 114 full-time employees in seven regional offices wand operates with an annual budget of $25 million. The budget is funded through fees paid by tribal gaming operations and can be up to 0.080 percent of gross gaming revenue in keeping with the Indian Gaming Regulatory Act.