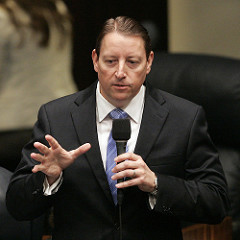 On January 12, Florida state Senator Bill Galvano filed SB8, the first gambling legislation for the upcoming session. Among the 112-page bill’s provisions, blackjack would be expanded from only being available at the state’s Seminole Tribe casinos to South Florida parimutuels, and the number of state gambling licenses would be decreased.

Galvano said the bill is “an important step in the development of a comprehensive, statewide approach to reforming current gaming laws. This legislation in large part builds upon Senate work that has taken place over the last several years. My goal has been to address all aspects of gaming in a comprehensive manner that balances the interests of an industry that has contributed to Florida’s economy for nearly a hundred years, our ongoing revenue-sharing agreement with the Seminole Tribe of Florida and the authority of local voters, while maximizing revenues to the state.”

The changes to gambling law, Galvano said, “represent a myriad of ideas advocated by various Senators and address industry concerns regarding antiquated and ambiguous provisions of current law. The bill balances the will of the voters who have authorized additional games and locations with a retraction of gaming permits across the state.”

Tribal spokesman Gary Bitner said, “The Seminole Tribe prefers to carefully review the bill before commenting.” Expanded gambling is a condition for the tribe to stop sharing revenue from its casinos.

Galvano admitted “further negotiations to reach a new agreement with the Seminole Tribe of Florida are necessary. While this legislation represents an important step, there is still a great deal of work to be done.”

House Speaker Richard Corcoran and state Senate President Joe Negron both have suggested the state legislature will ratify a new gaming compact with the Seminole Tribe this year. Corcoran said the compact must be conservative and result in less gaming in the state. Negron said he’s open to legislation that could expand gaming. State Rep. Carlos Trujillo, chairman of the House Appropriations Committee, said, “A lot of us would like to see a true contraction of gaming and a focus on better quality. There is a predatory nature in most gaming. We would like to see a transition from predatory to higher quality. Revenue is secondary. If good revenue is an outcome, that’s great but it’s not the priority.”

In December 2015, Governor Rick Scott signed a deal with the tribe that would allow it to exclusively offer blackjack at its seven casinos, add craps and roulette and keep its monopoly on operating slots outside Miami-Dade and Broward counties. In exchange, beginning July 31, 2017, the tribe would pay the state, over a seven-year period, $325 million the first year to $500 million in the seventh, for a total of $3 billion. Payments could increase after that. The tribe also conceded that it would continue making payments to the state even if the legislature authorized limited non-Seminole gaming: Palm Beach’s dog racetrack could add slots and pari-mutuels in Miami-Dade and Broward could add blackjack. However, if legislators approved any gaming expansion beyond that, the tribe could stop its payments to the state.

The measure passed a Senate committee but was postponed indefinitely after senators attached a companion measure authorizing six additional slots licenses outside of Miami-Dade and Broward counties, thereby reneging on the exclusivity clause of the compact. The tribe has continued to make monthly payments to the state, totaling $306 million in 2016.

According to Galvano’s bill, the Seminoles must agree that all ongoing legal actions over the compact will be dropped, and accept “revised exceptions from exclusivity” on slot machines and certain card games now being offered at parimutuel facilities with card rooms. “If we are going to do something we are going to get done sooner than later. There isn’t any appetite on the part of the president to have this issue hang over the session unless we’re really making progress. The indications I get from the House are the same. The Tribe is willing to work, but they are dubious,” Galvano said.

Galvano has been working on gambling legislation with state Rep. Jose Felix Diaz, chairman of the House Commerce Committee. “With everything we did last year, we thought we were going to be able to pass a bill, but it didn’t get across the finish line. We feel like the opportunity to negotiate is still there. We’re having negotiations with the Senate, and we’ll pass a compact or bill that’s in the best interests of the citizens of Florida that invests money in the right places,” Diaz said. State Rep. Mike La Rosa, chairman of the House Tourism and Gaming Control Subcommittee, said he hoped Galvano’s bill “would be the best deal for the citizens of the state of Florida, and we’ll see what happens.”

Some of the major provisions in Galvano’s bill include:

Decoupling at horse and dog tracks.Dog and horse racetracks would no longer be required to run live races in order to offer other gambling, such as slots or cards. Parimutuels support decoupling because of declining attendance at the races, but horse and dog interests said it would kill their industry. Florida Greyhound Association spokesman Jack Cory said decoupling “would change cost over 3,000 Florida families their small businesses and put over 8,000 beautiful greyhounds at risk.”

Reduce parimutuel permits: The state would be allowed to buy back “and cancel active parimutuel permits.” The money would come out of the revenue share payments from the Seminoles, up to $20 million.Also, owners of declining parimutuels could sell their permits to others who want to install slots at newer facilities beyond South Florida. This provision is seen as decreasing gambling in the state.

Expand blackjack beyond Seminole casinos: Parimutuels in South Florida would be allowed to have up to 25 tables per facility, and bets could not exceed $100 for each initial two-card wager. Parimutuels permitted to offer banked blackjack would be taxed at 25 percent of the blackjack operator’s monthly gross receipts.

Expand slot machine availability: An “eligible facility” would include “any licensed pari-mutuel facility.” However, the tracks must be in a county where voters approved slots by referendum and “conducted a full schedule of live racing for two consecutive years.” Diaz said it is unlikely the Seminoles would agree to allow slot machines in counties close to its facilities, such as Hillsborough County, home to the tribe’s most lucrative Hard Rock Casino, and Lee County, where a slots referendum was approved, located close to the tribe’s Immokalee Casino. “We don’t think every single county that has passed a referendum is going to be able to get slots. We don’t think it’s possible with the conversations we’ve had with the Seminoles. At the end of the day, they decide what is exclusivity and what is not,” Diaz said.

The unknown factor is the much-anticipated ruling from the Florida Supreme Court regarding slots expansion at Gretna Racing in Gadsden County. At issue is whether the facility can add slots—an expansion of gambling—without legislative consent. If the court sides with Gretna, ruling that such consent isn’t required, Diaz said, “It complicates any attempt to give the tribe an exclusive product, which is required for the state to receive any tribal revenues, under federal Indian gaming law.”

Galvano’s bill also would allow one extra slot machine license each in Broward and Miami-Dade counties, let lottery tickets to be sold at “point-of sale” terminals like gas pumps, with age restrictions, declare daily fantasy sports are games of skill, not chance, and establish an Office of Amusements to regulate them, reduce the slot tax from 35 percent to 25 percent, allow slots and cards to be played 24/7 and permit “all cardroom operators to offer designated player games.”

Galvano said, “There is an openness with both chambers and the governor’s office as well as the Seminole Tribe to work in earnest to see if something can be accomplished. Given the history since the last compact, nobody considers it an easy task and, quite frankly, there is a lot of doubt that we can get there. Having said that, there is a real commitment to try.”