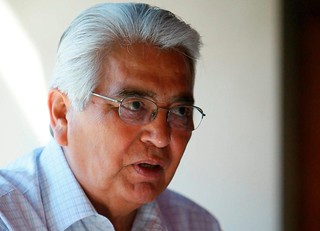 Barry Snyder (l.), who shepherded the New York-based Seneca tribe into the casino era, has died at 79. A force in Seneca Nation affairs for 50 years, he served eight terms on the Seneca Nation Council, was a tribal treasurer, and from 1980 to 2012 held the office of president five times.

Former Seneca Nation President Barry Snyder, who was instrumental in bringing the tribe into the casino era, has died at the age of 79.

Snyder was a force in the affairs of the western New York tribe for more than half a century, serving five terms as president.

Seneca Nation President Rickey Armstrong Sr. said, “He will deservedly be looked upon as a leader for all times. Throughout his life and through his service, Barry elevated the Seneca Nation and the Seneca people. As president, he touched every facet of life on our territories.”

Snyder was born on the Cattaraugus Indian Reservation, where he was raised by a grandmother who instilled in him a sense of pride in being a member of the Seneca Nation and a sense of respect for the tribe’s history and traditions.

After graduating from high school in 1957, he served two years in the Army and later worked as a barber and at the General Motors plant in Tonawanda, N.Y. He went on to serve eight terms on the Seneca Nation Council and also served as treasurer. In 1980, he was elected to the first of his terms as president. He returned to the office in 1992, 2004, 2008 and 2012.

His administrations saw major advances in the tribe’s economy and infrastructure, including the development of high-quality health care, education, recreation and public safety facilities.

But his greatest economic achievement was the introduction of Class III casino gaming, which led to the development of Seneca Niagara Resort & Casino in Niagara Falls, Seneca Allegany Resort & Casino in Salamanca and Seneca Buffalo Creek Casino in downtown Buffalo. He served for years as chairman of the board of Seneca Gaming Corp., a private company that has grown to a staff of 4,000 employees, where he led a growth strategy that included significant expansions at all three properties.

“Just like with his businesses on territory and how he approached his duties when he was in elected office, he had a vision for Seneca Gaming Corporation, and he was masterful at getting people to buy into that vision,” said Seneca Gaming Chairman Kevin W. Seneca. “I don’t think the company would be where we are today if not for his leadership.”

Armstrong said, “Barry understood that, in order to achieve our long-term goal of true sovereignty, we first need to achieve economic sovereignty. He advanced that goal more than any leader in our nation’s modern history. He set lofty goals for the nation, and he accomplished them.”