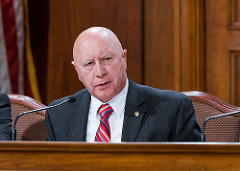 A comment made by U.S. Attorney General Jeff Sessions during his confirmation hearings was seized upon by opponents of internet gaming during the March 8 joint hearing of the Pennsylvania General Assembly on an omnibus gaming bill.

During his confirmation hearing, Sessions said he would examine the 2011 opinion from the U.S. Justice Department that cleared the way for online gaming. That opinion stated that the federal Wire Act of 1961, which bans interstate wagering, applies only to sports betting, and does not prevent internet gaming. The opinion led to legalization of iGaming in New Jersey, Delaware and Nevada.

Sessions has not mentioned the issue again since the hearings, but at the March 8 Pennsylvania hearing, which dealt only with iGaming, opponents of online gaming used the possibility Sessions could reverse that opinion as fodder in testimony before members of the state House Gaming Oversight Committee and Senate Community, Economic & Recreational Development Committee.

“With the fluid situation in Washington, internet gambling is an unreliable and possibly nonexistent source of revenue,” testified David Cookson of the Coalition to Stop Internet Gambling.

“Everyone is sort of waiting to hear what they (Justice) have to say,” Rep. Aaron Kaufer, a House panel member, told the Scranton Times. “The concern is this could all be for naught for all we know.”

Senate Panel Chairman Mario Scavello, however, said at the hearing he is not worried about a federal policy change, and that the panels should concentrate on the legislation at hand. “Legalizing, regulating and licensing (iGaming) is the only thing to do,” he said.

A second joint hearing on gaming issues is scheduled for today (March 20). In addition to iGaming, the lawmakers will consider measures to expand gaming with tablets at airports, and passage of a new local host community fee to replace the one declared unconstitutional last fall by the state Supreme Court.

HB 801 would prohibit and criminalize online gambling in Pennsylvania, stating, “The board shall not promulgate rules and regulations allowing any form of internet gambling.”

The measure also would criminalize operation of an iGaming site. “No individual or entity shall solicit, invite, collect or accept cash or any other form of currency through the internet for the purposes of wagering or betting,” the bill states. “No individual or entity shall organize, or cause to be organized, any type of gambling event that is held over the internet.”

The penalty for violating the bill would escalate with each offense. The fine for a first offense is a mere $300, followed by a $600 fine and/or up to three days in jail for a second offense, and the charge of a third degree misdemeanor thereafter.