Sessions’ Stance Against Online Gambling Causing Fears of a Ban 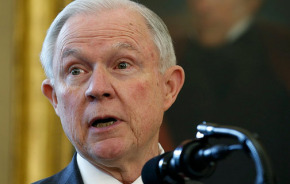 It seems as long as Jeff Sessions is U.S. Attorney General, online gambling advocates are going to be worried about a possible federal ban on online poker and casino sites.

Sessions said during his confirmation hearings that he was surprised by a 2011 Department of Justice opinion that cleared the way for intra-state online gambling, New Jersey, Nevada and Delaware have since began online gambling within their respective state borders.

Sessions made the comments in a reply to a question from Senator Lindsey Graham, who is a sponsor of the Restore America’s Wire Act, a bill backed by major Republican donor Sheldon Adelson that would ban online gambling in the U.S.

Recently the National Governor’s Association sent Sessions a letter coming out against a federal reinterpretation of the 2011 opinion, saying the ban would trample on state’s rights. The association maintains it is up to the states to decide gambling questions within their borders.

The letter, however, set off a series of editorials and news reports speculating on what Sessions will do. It also brought more attention to Graham’s bill, which has been seen as gaining little traction in Congress.

“RAWA seeks to change that historic structure of the states governing themselves by having the federal government dictate gambling laws for everyone,” wrote former Republican U.S. Rep. Lynn Westmoreland of Georgia in one editorial. “That shift furthers the idea of a strong central government requiring uniformity in all states instead of recognizing the uniqueness of each individual state’s laws.”

However, despite the new wave of opposition to the ban, there has been no real sign that President Donald Trump—a former casino owner—supports such a ban or that Sessions would make revisiting the DOJ opinion a priority.