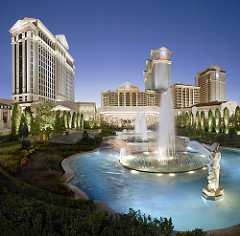 Caesars Entertainment and its wholly owned Caesars Acquisition Co. subsidiary have received approval to merge from the shareholders of both companies, bringing the Chapter 11 reorganization of Caesars Entertainment Operating Co. another critical step closer to completion.

The merger of the two Nasdaq-listed companies is key to satisfying the claims of a legion of CEOC creditors, giving them a sizable stake in a newly enlarged Caesars whose principal holdings are comprised of 17 U.S. gaming resorts, including the profitable Atlantic City properties and the financially healthiest of the Las Vegas ones.

They also get majority control of CEOC’s 18 U.S. casinos and a newly formed real estate investment trust that will own them and lease them back to an operating company they also will control.

A third leg of the plan calls for creation of a new company to take possession of Caesars Palace on the Las Vegas Strip.

The reorganization, which is still making its way through state regulatory approvals, was approved in January in U.S. Bankruptcy Court in Illinois, two years after CEOC filed for Chapter 11 protection buried under some $23 billion of debt, the hangover of a $30 billion leveraged buyout of Caesars Entertainment by private-equity giants Apollo Global Management and TPG Capital.

The ill-timed deal, completed in 2008 on the eve of the Great Recession, eventually forced Caesars to disperse its massive holdings―47 resorts currently, including 12 outside the U.S.―among several subsidiaries. The effect of that process was to strip majority-owned CEOC, which was carrying the lion’s share of the debt from the buyout, of the most successful Caesars casinos and made for a prolonged and torturous restructuring complicated by a raft of creditor lawsuits.

The restructuring shave around $10 billion of the debt CEOC brought to the bankruptcy filing back in 2015.

Caesars President and CEO Mark Frissora hailed the approval of the Caesars-Caesars Acquisition merger as “an important milestone”.

“The successful conclusion of the restructuring,” he said, “will create new opportunities for incremental investments in growth.”