HomeThe ShuffleSharepots Let Players Win a Slice of the Pie

Sharepots Let Players Win a Slice of the Pie 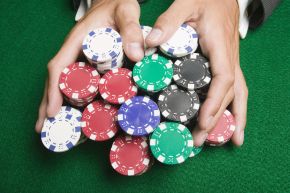 Most of the time, hitting a jackpot—or qualifying for some promotional bonus dollars—at an online casino is pretty much a solo achievement. After all, you hit the jackpot and collected your money.

But some of New Jersey’s online sites—especially VirginCasino.com and TropicanaCasino.com—have hit on a different kind of promotional scheme. Basically, they said, “Let’s put aside a big pile of money and then give all of our players a shot at a piece of it. We’ll call it a sharepot.”

The idea is pretty simple. VirginCasino.com puts aside, say, $5,000 in bonus money and then sets some requirements to get a share of the pot. Something like making a $50 deposit. That gets you one share.

When all the players at the site earn their shares, they get a small piece of the big pie.

OK, we know what you are probably thinking. “There’s probably a thousand players at VirginCasino.com. What good is one share of a $5K pot?”

Well, who said you only get one share? The point of any promotion is to reward play, and most sharepot promotions do just that. VirginCasino just recently ran a “Soaring Sharepot” promotion that gave out shares of the pot to players who completed one of three challenges.

So, if you like to play and play every day, over the three days of the promotion, you could easily earn five, 10 or as many shares of the bonus money as you cared to. And even though it’s a sharepot, you can easily outdistance the other players at the site by simply doing what you love doing in the first place—playing.

Or, you could just play like you always do, knowing you’re earning a little back in bonus money. Just beware, other players may be racking up more shares. The more shares there are at the end of the promotion, the smaller a single share’s value is.

See, it kind of pays to try and collect as many shares as possible. The more shares you have, the bigger your bonus payout.

After all, who doesn’t like getting the biggest piece of the pie?