HomeGambling RoundupShovels in the Ground for LV Convention Center Expansion

Shovels in the Ground for LV Convention Center Expansion 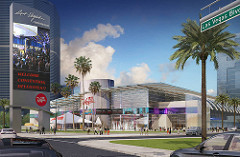 Construction of a $1.4 billion expansion of the Las Vegas Convention Center is under way.

Nevada Governor Brian Sandoval joined more than 300 people who attended a January 8 groundbreaking for the massive project, held at the former site of the Riviera on the Las Vegas Strip―land that is being folded into 1.4 million square feet of new exhibitions and meetings space.

The $860 million expansion is slated for completion in 2020, after which the Las Vegas Convention and Visitors Authority will turn to renovating the center’s existing 3.2 million square feet.

At full build-out, sometime in 2023, the center will be the second-largest in North America behind Chicago’s McCormick Place and will solidify Las Vegas’ positioning as one of the continent’s premier convention destinations―a business projected to draw an additional 600,000 visitors a year once the expansion is completed, drive incremental economic impacts estimated at more than $800 million a year and provide 7,800 full-time jobs.

“I’m very excited with this expansion, because I know that it’s going to allow (Las Vegas) to be even more competitive than we are right now,” said LVCVA President and CEO Rossi Ralenkotter. “This is our opportunity to brand us as what we are―the convention capital of North America―but also allow us to continue to position ourselves with our customers.”

The expansion is being financed through state legislative approval of public bonds backed by a 0.5 percent increase in the Clark County hotel room tax, the same legislation that’s providing $750 million toward the cost of a 65,000-seat domed stadium for the National Football League Raiders.

Chris Thompson, who markets the U.S. travel and convention industry globally as president and CEO of Brand USA, said the expansion would boost Las Vegas’ stature worldwide as a meetings destination.

“Most people would say, ‘Well, how tough is it to market Las Vegas?’ Well, the landscape changes, the opportunities change, the size of shows and what the organizers look for to support those shows and enhance the experiences of delegates changes,” he said. “So even though in most people’s eyes, Las Vegas probably has a plethora of attributes, even Las Vegas has to continue to rise to a high bar.”

Timed with the groundbreaking was the announcement that Steve Hill is leaving the Governor’s Office of Economic Development to assume the position of chief operating officer of the Convention Authority.

Hill, who chairs the Las Vegas Stadium Authority, the agency overseeing the work on the Raiders’ new home, is expected to stay in that post after he officially assumes the COO’s duties on January 22. He has also chaired the Southern Nevada Tourism Infrastructure Committee, an agency also intimately involved with the stadium project.