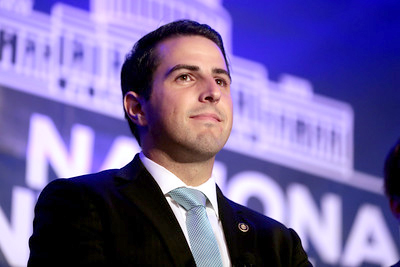 Rep. Phil Christofanelli (l.) has introduced a sports betting bill in Missouri, despite five others in the works. The legislator said his bill addresses concerns of casinos and others, such as an integrity fee for pro sports leagues, mandating official league data and including video lottery terminals.

Five sports betting bills have been introduced in Missouri, but that didn’t stop Rep. Phil Christofanelli from introducing number six.

Christofanelli told Legal Sports Report he saw three aspects he didn’t like mixed into other bills: an integrity fee to professional sports leagues, mandating the use of official league data, and putting betting in video lottery terminals.

Prior to his bill, Christofanelli visited riverboat casinos in the state. Since they would be authorized to offer the activity, he asked what they wanted in terms of legislation. They said leave out the integrity fee and official league data mandate.

“Profit margin for providers is much narrower than other types of gambling,” he said. “Whenever you have some sort of fee that takes as much as 1 percent of gross revenues, that substantially diminishes the profitability of offering those services.”

Casinos also told him they don’t want legislation to require they contract with a particular party for data.

“I hear from providers they’ll likely use official league data,” Christofanelli said. “I think that negotiation should happen between providers and data owners, and they should reach a deal through the market rather than the force of the state government.”

Told of the “commercially reasonable” clause included with data mandates in other states, Christofanelli responded that the vague phrase sounds like “months of fruitful work for attorneys.”

Other bills in Missouri limit to one the number of mobile platforms a licensee can offer, as many states have done. Christofanelli heard from providers that more online brands—or skins, as they’re commonly known—could lead to a more robust market thus, more revenue for the state.

The other issue revolves around adding VLTs, which are essentially slot machines, at bars, truck stops and entertainment districts around the state.

“Any bill with video lottery terminals faces a much more tenuous path than sports wagering on its own,” Christofanelli said. “I think sports betting is a lot easier to get done.”

Yet H 2088, Rep. Dan Shaul’s VLT bill with sports betting did advance from committee to the House floor earlier this month. With so many other sports wagering proposals in the state, Christofanelli realizes there will need to be give and take to reach a consensus.

“I recognize the legislature is a political institution and a lot of times there are compromises that are made throughout the legislative process that result in other outcomes that might not be ideal,” Christofanelli said. “I will continue to advocate for what I believe is the best way to do this, but ultimately I’d like to see something get done.”