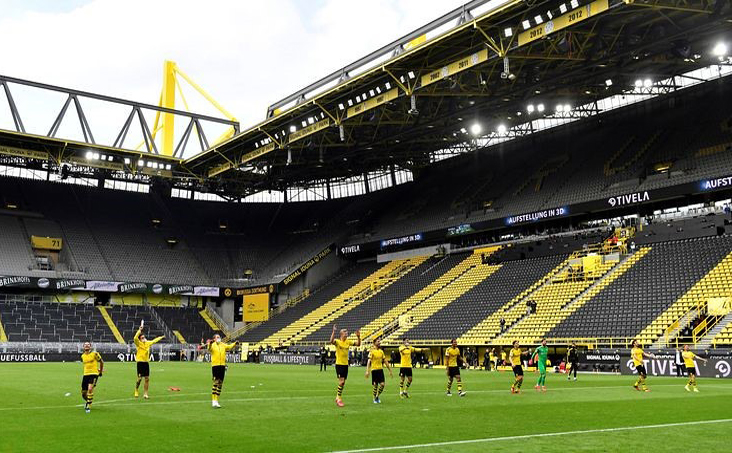 One of the most popular leagues in the world, German Bundesliga football, returned to action last Saturday, with social distancing in place. So, how’s that no-fans thing working for you?

After a two-month sports draught, the time has come for major-league action to return. The first big domino fell on Saturday, when the German Bundesliga returned to action with the 26th of 34 rounds.

German football (soccer to U.S. fans), is fanatically popular in the fatherland, and in a normal season, draws the highest average stadium attendance in the world. Unfortunately, the first slate of games were played May 16 with no fans in attendance, and a ton of weird restrictions in place to keep players safe, or safer.

The effects of the empty stadiums were apparent during goal celebrations. While the no-crowds thing was noticeable throughout the match, the silence was deafening after a goal. Soccer fans instinctively expect the crowd to roar after any goal, which are hard to come by in a strong league like the Bundesliga.

The fact is, while we all want major-league sports to return, you’ve got to ask if this is the best path forward. Every goal scored during Saturday’s game had an underwhelming feeling. To see players make big goals in crucial matches and be met with complete silence was awkward, to say the least.

Adding to the weirdness, players were told to avoid contact whenever possible. So some goals were celebrated by a bunch of players standing six feet apart. Several times, players either forgot these rules or disregarded them as they embraced each other after scoring. Whether they just got caught up in the excitement remains to be seen, but the Bundesliga is expected to tighten up its guidelines to keep them from doing it again. Interestingly, many fans were displeased by these displays and were glad to hear players won’t ignore safety guidelines in the future.

But Hertha Berlin Manager Bruno Labbadia saw no problem with his team members hugging or high-fiving. As he pointed out, “Soccer is a contact sport. … We’re close to the opponents during every duel, every corner kick. We cannot prevent such things.”

So why not mark a victory with a fist-bump?

Register as a new player at PlaySugarHouse.com, and you’ll get a 100% deposit match up to $250! New customers only.

Overall, the general reaction to this weekend’s return was a very positive one. Most fans are thrilled to have big-time soccer to cheer for. And players are grateful to be back on the pitch, regardless of the circumstances.

So with the return of the Bundesliga and the reactions from around the world, this can only lead to further speculation about other major leagues. Neighboring popular leagues such as the English Premier League (above) and Italian Serie A are pushing to come back in the near future, and the Bundesliga’s return can only help the cause.

In the U.S., Major League Baseball is supposedly shooting for a July opening day. But it’s probably safe to assume that we’ll see empty stadiums for at least the first couple of months, which should bring an interesting reaction from American fans.

As more and more leagues reopen for business, it bodes well for U.S. sports. One thing we can all agree on is that sports with weird regulations are better than no sports at all.

So. Silence in the stands? No body slams? Really polite soccer stars who salute each other from six feet?