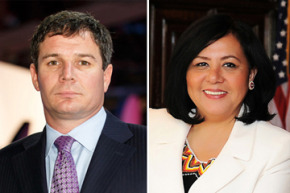 The Mississippi Gaming & Hospitality Association (MGHA) last week announced that it has confirmed two important keynote speakers for the Southern Gaming Summit, May 2-3, along the beautiful Mississippi Gulf Coast. Opening the SGS conference following a breakfast at the Beau Rivage on May 3 will be American Gaming Association President & CEO Geoff Freeman. Later that day, highlighting the business luncheon (sponsored by Global Gaming Women) will be Phyliss Anderson, the Tribal Chief of the Mississippi Band of Choctaw Indians.

“We’re excited to present these two dynamic speakers at this year’s Southern Gaming Summit,” said Larry Gregory, the executive director of the MGHA. “Geoff Freeman will bring his message of legal sports betting and industry unity to the show, and Chief Anderson will highlight the importance of the tribal government gaming segment of the southern gaming industry. These two speakers once again illustrate the importance of the Southern Gaming Summit to the U.S. gaming business.”

Phyliss Gilland, the president of Global Gaming Women, says Chief Anderson is the perfect speaker for the GGW-sponsored lunch, which is open to all.

“We are honored to have Chief Anderson speak at the Global Gaming Women luncheon at the Southern Gaming Summit,” said Gilland. “Chief Anderson has achieved much in her career, and with her success is a role model for women and men in both the tribal and commercial sectors of the gaming industry.”

The mission of Global Gaming Women (GGW) is to support the development and success of women in the international gaming industry through education, mentorship and networking opportunities. GGW brings together women from all segments of gaming in an effort to enrich their professional and personal lives.

In his role as chief executive of the AGA, Geoff Freeman is the leading advocate for the commercial and tribal gaming industry and is responsible for positioning the association to address regulatory, political and educational challenges and opportunities.

Prior to joining the AGA, Freeman was chief operating officer and executive vice president for the U.S. Travel Association, the nation’s leading voice for increasing travel to and within the United States. Under his strategic leadership, the travel industry enacted the Travel Promotion Act, derailed an assault on corporate meetings and events, and began the march to building an army of one million employee activists. During his tenure, U.S. Travel doubled its resources.

Phyliss J. Anderson, a native of the Red Water community, serves her people as tribal chief of the Mississippi Band of Choctaw Indians. Chief Anderson was officially sworn in as the first woman chief in Choctaw history during an inauguration ceremony on October 4, 2011. She is currently serving her second term in office.

Chief Anderson, fluent in the Choctaw language, has more than 30 years of experience with tribal government management. In 2003, she was elected to serve as a tribal council representative for her home community. While seated as a representative she served in the position of secretary-treasurer for the tribe. Over the years she has shown a strong commitment to financial responsibility; operating an accountable and transparent government; and building the quality of life on the reservation.

Southern Gaming Summit is the most important regional conference in the gaming industry, covering gaming in the South, the Midwest, the Rockies and the Mid-Atlantic states. Southern Gaming Summit is owned by the Mississippi Gaming & Hospitality Association, the organization representing 28 casino resorts in Mississippi. SGS is being managed by Casino Connection International, the parent company of Global Gaming Business magazine, the leading trade publication for the casino industry. For more information on SGS, visit the website at www.sgsummit.com or contact Larry Gregory at lgregory@msgaming.org, Roger Gros at rgros@ggbmagazine.com.