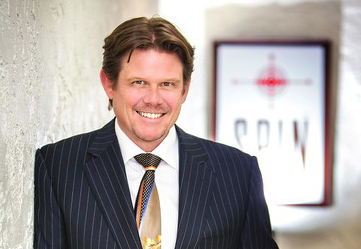 Spin Games, the company begun by industry veteran Kent Young (l.) in 2012, was first into the New Jersey iGaming market. It’s poised to grow as online gaming expands across the U.S.

Kent Young is in the right place at the right time.

Young first made his name as a supplier of slot machines to the brick-and-mortar world. But where the former vice president of marketing and R&D for Aristocrat Technologies has taken his current company can be traced to vision, as Young was one of the earliest gaming veterans to realize the potential of the U.S. online gaming market—a market that’s about to get a lot bigger.

Young started Reno-based Spin Games in 2012 as a third-party content supplier. This was a business he had entered after leaving Aristocrat in 2007. His True Blue Gaming supplier was bought by Aruze, where he headed their U.S. operations for two years. With Spin Games, Young returned to the content business.

But this time, it was with an eye toward the future—in particular, U.S. online gaming.

Young employed longtime game developer and programmer Michael Halvorson (now with Merkur) as chief development officer. Halvorson led the development of Spin Games’ HTML5 remote gaming server. Dubbed the ROC, for Robust Online Client, the server was the first to use the flexible HTML5 format. Spin loaded it with proprietary slot, video poker and bingo games, and the company was the first to submit a proposal for the nascent New Jersey online gaming market.

When New Jersey iGaming launched in November 2013, Spin Games had partnerships in place with Caesars Entertainment, Golden Nugget and Resorts. Spin Games’ RGS is still prominent in the New Jersey market, and the company is poised to grow with the U.S. iGaming and social gaming markets, as online gaming is set to launch in Pennsylvania and elsewhere.

“I had always been optimistic about the U.S. (iGaming) market,” Young told GGB News. “I really saw it as an opportunity, because a lot of the North American homegrown companies weren’t really focused on iGaming.”

Young adds that he had expected iGaming to expand a lot more quickly after New Jersey launched in 2013, but notes that with Pennsylvania finally launching online gaming this year, the market’s about to heat up.

“We think we’ll be doing similar numbers in Pennsylvania to what we’re doing in New Jersey,” Young said. “We’ll have West Virginia next year, and we’re going into British Columbia early next year. Each time we move into a new jurisdiction, we will see a significant increase in our revenue, because we can capitalize on the development that we’ve already done in terms of that technology and content. It’s good top-line growth each time we go into a new market.”

Young says the legalization of sports betting in the U.S. was good news for the iGaming market, as the vast majority of U.S. sports betting so far has been online. The growing sports betting market, in fact, has already meant new business for Spin Games. “We’ve done some deals with DraftKings, for example, where we operate on their casino site and they cross-market their sports betting customers to the casino side,” Young said.

“Casino iGaming will follow sports in some jurisdictions, because so much of sports betting is mobile. A lot of the initial (U.S. sports betting) legislation is just for sports, not iGaming, but we think it’s only a matter of time before they adopt both sports and iGaming.”

Meanwhile, Spin Games continues the process of increasing the portfolio of games running on its ROC server, now numbering around 100 across both real-money and social gaming. Over the past six years, Spin Games has built up variety in its portfolio through a number of partnerships with slot manufacturers and third-party suppliers.

“We initially went in with our own video slot, video poker and bingo content,” Young explained. “Then, we did a technology license agreement with Konami where we ported a lot of their land-based product, digitized it and put it on our RGS deployed into New Jersey. From there, we did the same type of technology license deal with Everi, where we ported 10 games. (Everi subsequently developed its own RGS.) Along the way, we’ve also done other third-party content, so we’ve shifted our model to be more of an aggregator.”

“That’s an interesting one, because it’s a crossover between sports and the traditional casino game,” Young said. “It’s getting a lot of really good feedback from the market, so we’re really excited to offer it across the portfolio running on our RGS. We’ll be launching that in Q1 next year.”

As the U.S. iGaming market heats up, so will Spin Games. “From the start, we’ve had an annual 50 percent increase in our business,” said Young, “but moving forward, as each new jurisdiction opens up, we think we’ll be doubling our business.”