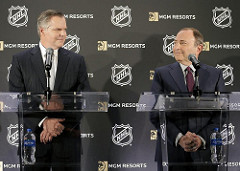 The signs are clear for every smart pro sports team and league executive to read.

PASPA, the Professional and Amateur Sports Protection Act, the federal government’s age-old ban on bookmaking, has been relegated to the constitutional dust heap. Sports betting is now legal in six states. Dozens more will be legalizing in the years ahead. The broad landscape that sports and corporate gaming have always shared, in one way or another, is fundamentally shifting. It’s time to shed those quaint reservations about gambling and dive in to where the money is.

The company that owns the National Hockey League’s New Jersey Devils, the National Basketball Association’s Philadelphia 76ers and a major New Jersey sports arena is among those going all in.

Harris Blitzer Sports and Entertainment will allow bookmaking giant William Hill and casino titan Caesars Entertainment to open lounges at the Devils’ home at Newark’s Prudential Center to promote sports betting to customers with gambling accounts on their mobile phones.

Neither facility can accept cash bets, which are restricted in New Jersey to Atlantic City casinos and the state’s racetracks, but it’s pretty close.

Mind you, sports betting has taken off in New Jersey. More than $336 million in bets have been placed since it began in mid-June, and mobile betting is the fastest-growing segment. In September, $105 million of the nearly $184 million worth of bets placed in the state were done online or via cell phone.

As with William Hill, the agreement will enable Caesars, which owns three casinos in Atlantic City and a casino outside Philadelphia in the city of Chester, to “connect with engaged sports and live event fans to promote its new sports book and mobile sports betting app throughout the Garden State,” a Harris Blitzer spokesman said.

It provides Caesars with space for a 5,000-square-foot branded restaurant and bar on the Pru’s main concourse and gives the company exposure on the arena’s 80 digital boards and 4,800-square-foot outdoor LED board. Caesars branding also will appear on tickets, wristbands, concourse pillars, signs, staff uniforms and more.

Caesars will also have a presence at 76ers games through advertising placements, although sports betting is not yet legal in Pennsylvania.

In Maryland, Caesars’ Horseshoe Baltimore casino has struck a cross-promotional and marketing deal with the NFL’s Baltimore Ravens, and in Las Vegas the company has written its name into the future of the league’s Las Vegas Raiders with a 15-year agreement as a “founding partner” of the team’s $1.9 billion, 65,000-seat domed stadium scheduled to open for the start of the 2020 season.

It’s the Raiders’ first partnership with a casino operator, one that provides Caesars with a branded stadium entrance and drop-off zone, digital signage and media, radio and print marketing in addition to alumni, player and cheerleader appearances. Total Rewards members will have access to a Caesars-branded “Owners Suite” at the 50-yard line, VIP dinners on the field, training facility events, fantasy camp participation, stadium tours and tickets to home games and most stadium events.

“Caesars will become an essential part of the game time ritual for Raiders fans everywhere,” said Chris Holdren, the company’s chief marketing officer. “From activations to exclusive experiences, fans of the silver and black will see Caesars as their home on game day.”

Though larger in scope the agreement is similar in concept to cross-marketing relationships recently concluded between the Dallas Cowboys and the Chickasaw Indian tribe’s WinStar World Casino in Oklahoma and the NHL’s Las Vegas Golden Knights and Southern California’s San Manuel Casino, owned by the San Manuel tribe.

Not to be left behind, MGM Resorts International has extended its long marketing arm into the NFL with an agreement making the gaming giant the “official gaming partner” of the New York Jets.

Coming just days after MGM sealed a historic partnership agreement with the National Hockey League, the Jets deal, like the NHL partnership, is corporate-wide. MGM calls it the “most comprehensive and integrated gaming partnership in the NFL”.

Its duration and financial terms weren’t disclosed, but the basics of it are that MGM gets stadium signage, social and digital sponsorship and advertising on Jets’ produced television shows and game day radio broadcasts to promote the company’s properties, of which several are in East Coast markets: Borgata in Atlantic City, MGM National Harbor in Maryland near Washington, D.C., the new MGM Springfield in Massachusetts and, at some point next year, Empire Casino and Raceway in Yonkers, N.Y., almost within shouting distance of midtown Manhattan.

The Jets and MGM also will join forces on a non-gambling mobile play-along predictive game—“I Called It presented by Play MGM,” a variation of the Jets’ current free-play “I Called It” game enhanced with more features, expanded prizing and deeper leaderboards featuring Jets fans.

Like the Jets deal, the NHL partnership is company-wide, providing MGM access to the league’s media platforms and events to market its properties and enabling the company to leverage a host of NHL promotional opportunities ranging from the Stanley Cup Playoffs to the NHL All-Star Game and the NHL Winter Classic and the NHL Stadium Series.

And like the Jets deal—and the pioneering data-sharing deal the company reached with the National Basketball Association earlier this year—technology also figures prominently.

MGM, which owns 50 percent of the T-Mobile Arena on the Las Vegas Strip, home of the NHL’s Las Vegas Knights, will have access to “previously unseen enhanced NHL proprietary game data” generated by the league’s state-of-the-art tracking system.

Like the NBA agreement it resolves a lot of sticky intellectual property rights issues dating back to when most of the major pro sports leagues and the NCAA fought the legalization of sports betting. When the U.S. Supreme Court rendered that moot earlier this year, the leagues have been petitioning state and federal authorities for the right to charge betting operators for access to the game data they need to settle bets. They say it’s intellectual property. They say also the fees are necessary to ensure the integrity of the games. Bookmakers say the fees would eat up much of their profits and price them out of the competition with offshore books. They also argue the data is not the property of the leagues, pointing to the obvious fact that Nevada bookmakers have been using the information for decades.

Experts like Irwin Raij, co-chair of the sports group at international law firm O’Melveny & Myers, see MGM’s partnerships with the NBA and NHL as a “practical solution” to the controversy that likely will be copied.

“MGM believes in the free market,” said Chairman and CEO James Murren. “We believe that there are going to be winners and losers in sports betting. We intend to be the winner. We don’t want to be the winner because someone else is boxed out of the opportunity.”

The fact that both agreements are non-exclusive means they won’t be the last for either partner, and that in itself is a clear signal that the leagues are moving away from their fee demands in favor of finding innovative ways to package proprietary data that benefit both themselves and betting operators—in this regard providing technologies that significantly enhance the potential range of in-play betting opportunities.

Not every deal is flying smoothly, however.

The Jets’ have signed a sponsorship agreement with an overseas online casino operator—888 Holdings—that NFL authorities are concerned may have crossed the line.

As it stands, several massive banners outside the team’s MetLife Stadium on the New Jersey side of the New York metro area bear “888.com” in broad letters.

The problem is, NFL rules still forbid the advertising of sports-betting sites with exceptions made for fantasy-sports sites at NFL stadiums and on its broadcasts. Sources close to the Jets told The New York Post the ads don’t violate league policy because they don’t specifically name 888sport, the company’s sports-betting site.

It remains to be seen whether the banners will stay.

As for the strength of the embrace in which big-time sports and big-time gaming now find themselves, it’s only going to get stronger.

“The fact of the matter is the world has changed,” as NHL Commissioner Gary Bettman put it. “The way people consume sports has changed, and frankly, whatever views anybody had a year ago have been changed by the fact that the Supreme Court ruled on PASPA.”