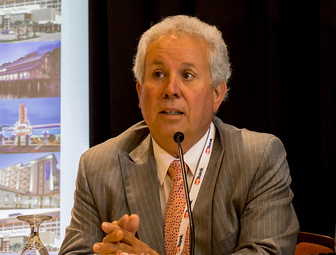 Several gaming bills have been pre-filed for the Georgia legislature’s 2021 session. Rep. Ron Stephens (l.) said his online sports betting bill would be the easiest to pass, as it wouldn’t require a constitutional amendment.

In Georgia, state Rep. Ron Stephens, chairman of the House Economic Development and Tourism Committee, said of the numerous pre-filed gambling bills, his measure legalizing online sports betting “is the easiest to pass. It clearly does not require a constitutional amendment. It’s just a matter of us giving the Georgia Lottery Commission direction and authority they already have.”

Other gaming bills expected to be debated during the 2021 session which starts January 11would allow sportsbooks at future casinos and at professional sports venues, including Mercedes-Benz Stadium, Truist Park, State Farm Arena and Atlanta Motor Speedway.

Stephens noted illegal gambling generates billions of dollars in Georgia but it’s not regulated or taxed. “All we’re going to do is capture the tax,” Stephens said. Linville added, “It’s time to bring it out of the darkness and into the light.”

However, Senator Bill Cowsert, chairman of the Senate Regulated Industries and Utilities Committee, cautioned legislators need to consider how easy online access to casinos, racetracks and/or online sports betting available at the fingertips might affect problem gamblers and their families. He said, “We need to make certain we educate the gamblers what the risks are and do something to make sure they don’t hurt themselves.”