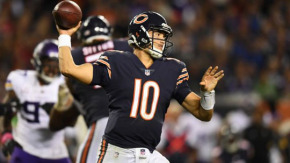 Quick hits, tidbits and hopes on keeping your wits as we head into the last two weeks of the NFL season.

The Chicago Bears have become a surging 10-4 against the spread, up from 3-3. Playing under the radar without playoff expectations has helped them rise. They finally make the post-season and may have the best defense going in. Quarterback Mitchell Trubisky, injured at times this year, is worth about three points, by himself, to the spread.

The Cleveland Browns are 4-2 against the number under new coach Gregg Williams and 9-5 overall, and are finally starting to finish close games, as they did in Denver last week. For those who love the Brownies, they are opening at a whopping seven-point favorite against the Cincinnati Bengals in Week 16. Ironically, it comes as they face their old coach Hue Jackson. They were favored twice in 40 games when he was there. Nonetheless, in all the giddiness, you start to wonder when the posted number will be too high for them.

The New England Patriots finish the road season 3-5 and may gloss over their deficiencies with home games against the Buffalo Bills and New York Jets. No sympathy from the oddsmakers, though, they came out as 10.5-point favorites against Buffalo.  They have gone 13-2 the last 15 times they were favored by 10 points. On the flip side, Tom Brady is making some dumb, rookie-type mistakes near the goal line. And the Pats will lose from between two to five games this year against teams that won’t make the playoffs.

Remember, two Saturday games in Week 16, the Baltimore Ravens are +5 at the Los Angeles Chargers, and the Washington Redskins are +10 at the Tennessee Titans.

Horse Racing Wraps Up for 2018

Aqueduct Racetrack in New York endures difficulty filling out their winter fields. Its December 27 card, two days after Christmas, is one of two Thursday events the track canceled this month. If you’d planned on playing Aqueduct that day, it can’t happen.

Weather, particularly the high winds of the past couple years, are slowly forcing horsemen to switch operations to warmer climates. Both Aqueduct and Finger Lakes in New York, which is located even further north, are vulnerable to the weather conditions that prompt horsemen to refuse to enter horses.

Look for this to create expanded fields and better racing in places like Gulfstream Park and Tampa Bay Downs, in Florida, and even Laurel Park in Maryland.

Racing gets a bit quiet from now through the end of the year. Aqueduct offers the $125,000 Queens County and Gulfstream Park has the $100,000 Mr. Prospector on December 22.

On December 29, Santa Anita leads the way with the $300,000 American Oaks. Laurel chips in a nice lineup of $100,000 races including the Heft, Gin Talking, Dave’s Friend and Third-Eight Go-Go races. Aqueduct has the $100,000 East View and Alex Robb, while Gulfstream presents the Janus, Abundantia and Allen Jerkens events, all for $100,000. The purse money should attract fields large enough to offer a good range of betting options.

This is my last blog of the 2018 season. Here’s wishing you an abundance of friendly bounces, photo-finishes, a Pick 5, Pick 6 and a lucrative carryover!