Sports Betting Tax Revenue Less than Expected in Most States 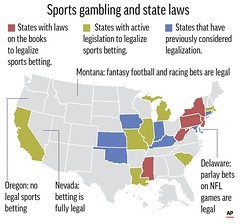 When the U.S. Supreme Court overturned a federal ban on sports betting, several states rushed to get legal sports books in place.

However, most of those states have failed to meet tax revenue projections for sports betting due to a number of reasons, an analysis by the Associated Press has found.

An example is Rhode Island, where heavy betting on the New England Patriots in the Super Bowl—New England won the game and covered the spread—led to sportsbooks there losing $2.35 million.

Rhode Island had projected to generate more than $1 million a month for its state budget through its 51 percent tax on sportsbook proceeds. The state has actually been taking in about $50,000 a month from the late-November launch through February.

In all, four of the six states that implemented sports betting have not seen projected tax revenue. West Virginia is taking in just a quarter of the monthly tax revenue it had projected. Tax revenue is half the estimate in Mississippi and Pennsylvania, the AP found.

Reasons include slower than expected roll outs of sports betting to an unavailability of mobile sports betting aps in some areas. West Virginia, for example, has been plagued by a contract dispute among providers which has kept its only online betting platform offline for nearly a month.

The two exceptions have been New Jersey and Delaware, the first two states to implement sports betting. Both states had online betting in place before sports betting went live.

New Jersey has been bringing in about $1.8 million per month in taxes on sportsbooks. Delaware has also met tax projections primarily through a lottery run football-betting operation that has been in place since 2009.