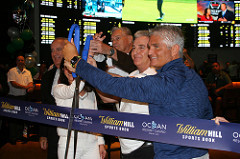 Three more online sports books have gone live in New Jersey ahead of the start of the NFL season.

William Hill, which runs the sports book at Monmouth Park racetrack and the Ocean Resort casino (and soon the Tropicana) in Atlantic City, and FanDuel, the operator at the Meadowlands Racetrack sports book, both launched sites, as well as the new online sports book opened by Caesars Entertainment.

“Since New Jersey decided to allow mobile sports betting, we have been working diligently to create the most engaging and fun mobile platform which provides users with the ability to place bets on their favorite sporting events,” said Mark Frissora, CEO and president of Caesars Entertainment.

The Caesars app is provided by Scientific Games. The two companies now have the ability to provide a full-service offering to bettors that includes the sportsbook platform, player account technology, and engaging customer touchpoints across in-venue screen solutions, point of sale terminals and the digital portal.

“We’re thrilled that Caesars mobile sports betting is live in New Jersey, enabling players to bet on their favorite sports teams today. We’re very proud of delivering a quality mobile betting platform, which truly rounds out Caesars’ sportsbook experience, and the speed with which we were able to launch this offering in this exciting new market,” said Keith O’Loughlin, SVP sportsbook for SG Digital. “We’re also proud of our Caesars partnership and their activation of a turnkey sports betting solution players will enjoy.”

Online sports books have already been launched by the Borgata casino in Atlantic City—under the playMGM brand—daily fantasy sports operator DraftKings—through a partnership with Resorts casino—and the PlaySugarHouse online casino site, which is branded to the Sugar House casino in Philadelphia but partnered in New Jersey with the Golden Nugget Atlantic City. The online sites join live betting sports books at the two racetracks and six Atlantic City casinos.

New Jersey gambling outlets took in $40.6 million in sports wagers in July, the first full month it was legal. Results for August have not been released, but both summer months are considered a slow time for sports betting. The real test of the state’s market will come with the NFL now underway.

Still, officials for the Sugar House casino say that early trends at their online site show bettors have been interested in baseball and action at the U.S. Open tennis tournament.

Also, DraftKings online sports book, which launched in early August, has already announced a promotion as it closes in on its 1 millionth bet. The site has passed 800,000 bets and will offer promotional bonuses totaling $35,000 for bets between 900,000 and 1 million. The 1 millionth bet will win a $10,000 bonus.

The facility at Ocean Resort features 360-degree video walls, dozens of viewing screens, two bars, lounge seating with individual charging stations, seven ticket windows and self-serve betting kiosks, according to the Press of Atlantic City. The casino scheduled a ribbon-cutting celebration for September 6, the opening day of the NFL season.

“It’s different than a Las Vegas sports book but I like to think it’s the best of what a sports book can be,” casino owner Bruce Deifik told the Press.

Golden Nugget has opened The SportsBook featuring 2,500-square foot of space in the casinos former poker room. It features four big screens plus 53 smaller televisions, nine betting kiosks and four ticket windows, according to the Press.

“There couldn’t be a better time for The SportsBook’s debut,” said Tom Pohlman, general manager of Golden Nugget in a press release. “Just in time for one of the busiest weekends of the year, players will feel like they are watching their favorite sporting event live from the comfort of the most luxurious setting New Jersey has to offer.”