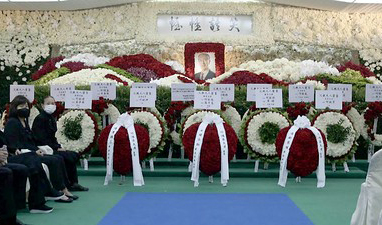 The death of Stanley Ho marked the end of an era for sure. His “monopoly” of gaming in Macau was more than just business. Richard Schuetz explains how Ho was a community leader providing jobs and a social contract with his workers and their families. His funeral service (l.) brought out serious emotions.

“I promise her I will make good no matter what.” —Stanley Ho, His promise to his mother

Stanley Ho has died, and anyone who knows anything about Macau and gambling knows that Dr. Ho was “The Man.” Granted monopoly control of gambling in the Portuguese colony in 1961, one of the many nicknames Dr. Ho acquired was “The Godfather,” and this nickname is a most appropriate way to help American audiences understand what he was all about–and more.

Toward the end of the last decade I had the opportunity to live in Macau for a bit, and teach a course on Casino Management and Regulation, held at both the University of Macau and Macau Polytechnic. I had a group of interesting students. Professors Bill Eadington and Nelson Rose sat through the first week of lectures (I think Bill was just keeping an eye on me); Grant Bowie, the CEO of the Macau MGM, was very supportive of the class and sent a number of his employees to attend; as did and Raymond Yap of Galaxy; and the Wynn folks sent a few people. I also had about five Ph.D. professors from the area take the class and that made me double-check all of my math lectures. Then there always seemed to be a group of four or five people who basically just showed up and dropped one name or another, and I have never been one to turn anyone away who wanted to listen to me talk.

During this time, I made a friend of one of the older students taking the class, and I would occasionally have dinner with him, and he and I would often walk the streets of Macau at night to look about and visit. What was most interesting about this gentleman was that he had worked for Dr. Ho for a number of years, and he had worked for Dr. Ho back in the day, as we say.

I always enjoyed our walks because I would get to hear stories about this bigger than life character who was Stanley Ho, for not only was Macau known for gambling in the last century, it was also known for a number of other industries that typically generate interesting stories. I will not share these stories, but I will share one that I found terribly important in understanding the life of Stanley Ho.

My friend told me that the government of Macau had often failed the people, and Dr. Ho had always been the one who held the safety net in these failures. If a neighborhood was flooding on too regular a basis, Dr. Ho would see that the problem was resolved. If a school needed uniforms, it would be an employee of Dr. Ho’s who would make the delivery of new uniforms. If there was someone who was bothering the people of a neighborhood, or being threatening or obnoxious, that person would go away, and no longer be a bother. And so on and so forth it went. The reality of Dr. Ho was that he was loved and revered in the community, and he truly had a social contract with the people of Macau. While he was a most successful businessman withing the region, he was also a very good citizen and understood the importance of community.

In 2014, there was an event at the Mob Museum in Las Vegas, and Ms. Elaine Wynn was one of the speakers. During this talk, Ms. Wynn lamented that “We don’t have the homeboys.” The point she was trying to make, as I understood it, was that there was not that person or group of people of influence within the community who kept an eye on things. What seemed a bit ironic about her statement was that one of the best at that role, in my opinion, was her ex-husband, Steve Wynn.

Las Vegas does not have a Steve anymore, nor a Kirk, nor a Hank, nor a Charlie Mathewson keeping a watchful eye on things. Mr. Binion has long passed and Jack is no longer involved in the game. Mr. Boyd has slowed down materially as has Mr. Adelson, whose focus seems to be on Ms. Adelson, supporting all things Republican and Israel. Gary Loveman never fit the bill, and Jim Murren struggled with multiple distractions, be it a licensing issue in New Jersey, the Great Recession, or a tragic shooting. The steady hand and mind of Bob Faiss is gone from the legal side of things, as is the vision of E. Parry Thomas in finance. There are others, but they are either gone, or did not seem to want that role.

Las Vegas has changed, and it has changed for the players are now private equity firms, hedge funds, and the like. The town does not have a Stanley Ho-type person(s) who can keep a watchful eye on things, handle what needs to be handled, and who can reel-in the traditionally bad stable of politicians who seem to continually replicate themselves year after year after year thinking that Las Vegas is about them.

One of the interesting things I find about the new Las Vegas is that everyone is working behind the scenes, or so they tell me. I recently published an article concerning an issue of interest for Las Vegas and Nevada, and was contacted by a number of people who were working “behind the scenes.” Las Vegas now seems to have a situation once described by John F. Kennedy, where: “Victory has a thousand fathers, but defeat is an orphan.” Moreover, all of these folks working behind the scenes basically seem to have done little more than experience a pyrrhic victory.

Where does this take Las Vegas? Nowhere good, is my guess. Vegas presently appears to be a rudderless ship, wounded and damaged and in need of a major course adjustment. It needs a leader and it needs a vision. It seems to need a Dr. Ho, but there just doesn’t seem to be one around.