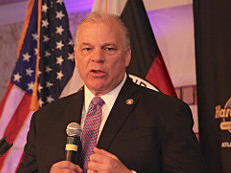 Several state attorneys general, including in New Jersey and Pennsylvania, are expected to sue the federal government to try to overturn the recently announced new Justice Department interpretation of the federal Wire Act.

In 2011 the DOJ’s Criminal Division declared, “the prohibitions of the (federal Wire Act of 1961) are limited to (interstate) sports gambling and thus do not apply to state lotteries at all.” In November the Criminal Division overturned that declaration by stating that the Act’s ban on the use of a wire for sending data on wagers, “are not uniformly limited to sports gambling.”

On February 14 the New Jersey Senate President Steve Sweeney said his state will seek a declaratory judgment against the Justice Department. Now the New Hampshire Lottery has indicated it will follow suit. Others with an interest in this issue might also, such as MGM Resorts or DraftKings.

Professor Steve Silver of the University of Maine School of Law told Legal Sports Report: “This entire situation highlights the need for Congress to revisit the Wire Act. Federal gaming policy is and has long been largely incoherent and inconsistent.”

Sweeney has written a letter to U.S. Deputy Attorney General Rod Rosenstein asking the federal Department of Justice to withdraw its newly released opinion on the 1961 federal Wire Act.

“This legislation has generated more than $1 billion for our then struggling casino industry and hundreds of millions in revenue, directly and indirectly, for our Treasury, brought back thousands of jobs, and saved thousands more,” Sweeney wrote. “The goal of our internet wagering law, as stated by its Senate sponsor Raymond Lesniak, was to revitalize Atlantic City’s struggling casino industry which had lost 15,000 jobs and to make New Jersey a national and international hub for internet gaming.”

Lesniak has been authorized by Sweeney to respond to the DOJ opinion on behalf of the state and has said he plans to challenge it in court. However, Lesniak has said he will wait 30 days to allow recently confirmed U.S. Attorney General William Barr to take an “honest look” at the opinion before moving ahead with potential legal action.

Lesniak has also filed a Freedom of Information Act request to determine who lobbied the DOJ to rewrite the Wire Act opinion. He joins with the state’s Attorney General Gurbir Grewal who has also filed a freedom of information request. Both charge that the new DOJ opinion was strongly influenced by the lobbying of Las Vegas Sands owner Sheldon Adelson who has funded a personal crusade to have online gambling banned in the U.S.

Sweeney said that the opinion “has already caused harm to the State of New Jersey,” since the Pennsylvania Gaming Control Board has halted a plan to place its internet gaming equipment in Atlantic City due to concerns that the placement would not be consistent with federal law.

Sweeney said the 2019 opinion “flies in the face” of the 2011 interpretation and that the new opinion is a “tortured analysis of sentence structure and comma placements” to interpret the “clear language” of the Wire Act and runs counter to a Fifth Circuit Court of Appeals opinion and a “thorough review” by the justice department in 2011.