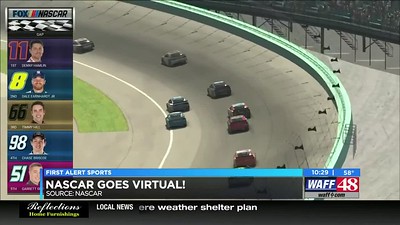 With traditional sports shut down by the coronavirus, states are getting creative when it comes to sports betting. Indiana approved wagers on soccer leagues in former Eastern Bloc nations. And Nevada has embraced esports, from virtual NASCAR (l.) to video game tournaments.

On April 3, Nevada’s Gaming Control Board added the 2020 eNASCAR iRacing Pro Invitational Series and 2020 ESL One-Dota Los Angeles to its list of approved sports to bet on.

The approval marked the second time in as many weeks the board has added new betting opportunities, and the first time Nevada sportsbooks have been allowed to take bets on a virtual auto racing event.

On March 25, the board permitted betting on Counter-Strike: Global Operations, under the auspices of the ESL Pro League.

“In a world without your traditional streams of sports, operators are continually looking for additional content to deliver to avid sports fans and regulators are responding,” consultant Brendan Bussmann of Global Market Advisors told Sports Handle.

ESL One-Dota was originally scheduled to be the league’s first live event in Los Angeles, till the coronavirus forced it online. The event, which began March 28 and runs through April 19, features 34 teams competing for $375,000 in prize money. The tournament is a round-robin best-of-three format with a best-of-five series for the grand finale.

eNASCAR features professional drivers playing a virtual game with a live television broadcast that sounds a lot like one at a live race, with the first for wagering being the virtual Bristol Motor Speedway on April 5. The races feature stars like Dale Earnhardt Jr., Kyle Busch, Denny Hamlin and Clint Bowyer competing against other Cup Series regulars as well as drivers from other series on NASCAR’s iRacing simulation platform.

“The global interest in the eNASCAR iRacing Pro Invitational Series has ranged far and wide and we continue to recognize the role this series is playing in providing sports fans worldwide with a much needed respite during the most challenging of times,” Scott Warfield, NASCAR managing director of gaming, told ESPN.

The iRacing Pro Invitational Series, created to keep fans engaged during the coronavirus pandemic-enforced shutdown has picked up good traction. The broadcasts of main-event races have been a hit, according to ESPN. Fox Sports drew 900,000 viewers for the inaugural race, the most-watched esports broadcast in national history.

“I’d love to have it on the board,” Matt Metcalf, head of Las Vegas sportsbook operator Circa Sports, told the sports network. “A million viewers last week … people are paying attention.”

Nevada sportsbooks must notify patrons that the iRacing simulators and equipment used in the eNASCAR races might differ slightly, and that official rules must be posted on the event organizer’s or sanctioning body’s website.

However, a controversy broke out last week when real-life NASCAR driver Bubba Wallace got into a bumping match with another driver and simply put down the controller and walked away, something that would never happen in real life.

eNASCAR has also updated its free-to-play mobile gaming app to feature the eNASCAR iRacing esports series, with updated fantasy and prop betting integration, according to SportsPro. The app is available to download on iOS and Android devices and will also give users a chance to win a $5,000 jackpot by accurately predicting the top two finishers and the highest finishers across the esports series’ six different groupings of four drivers.