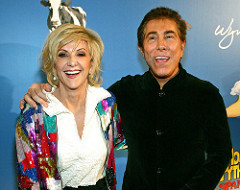 Steve and Elaine Wynn have agreed to end a bitter six-year-long court battle over control of their stock in Wynn Resorts in a settlement that could put their combined shares in play, a holding equivalent to 21 percent of Wynn’s equity and worth more than $4 billion.

Wynn Resorts said in a filing with the SEC late last week that the couple, who ended their marriage in 2010, will no longer contest provisions in their divorce settlement that prohibited either of them from selling their shares without the other’s consent. A state court judge in Las Vegas signed off on the agreement last Wednesday, removing a major legal obstacle to Steve Wynn’s ability to sell off portions of his 12 percent stake. Elaine Wynn holds 9 percent.

Wynn resigned as chairman and CEO last month following a barrage of sexual harassment accusations. First reported at length in a January Wall Street Journal article, the allegations, which Wynn has denied, include a secret 2005 payoff of $7.5 million to one of his reputed victims, a former Wynn Las Vegas manicurist, which first surfaced in a lawsuit Elaine Wynn filed in 2012 when her ex-husband refused to relinquish his effective control of her shares. She claimed the payment was known to members of the board of directors and some top executives, implying their complicity in her ex-husband’s alleged misconduct, which was pervasive for decades, according to news reports and complaints filed with police in Las Vegas and elsewhere.

Elaine, a director of the company since its founding in 2002, was ousted from the board in 2015, a move she claimed was instigated by her ex-husband as punishment for suing him. Wynn, in turn, has blamed her for trumpeting up the sexual misconduct allegations. She has denied any involvement. She still has claims pending in court against her ex-husband and the company related to her losing her seat on the board.

Regulators in Wynn Resorts’ home state of Nevada and in Massachusetts, where the company is building a $2 billion resort outside Boston, are investigating the misconduct allegations, and removing Wynn’s suitability as a major shareholder from the substance of those probes could prove key to the company’s ability to move forward with the confidence of the investment community. Last week’s filing said Wynn may seek to sell all or part of his holding, although his termination agreement imposes certain restrictions on that. Regulatory agencies in either state could, however, force him to divest as a condition of the company’s licensing.

Massachusetts requires anyone who owns more than 5 percent of a casino entity to pass probity investigations. And since Massachusetts Governor Charlie Baker and Attorney General Maura Healy have insisted that the Wynn name be removed from the building, it’s highly likely that Steve Wynn will have to fall below that threshold at a minimum.

A spokeswoman for Elaine Wynn declined to comment on her plans, but she has said previously she wanted control over the stock to focus on philanthropy. But there are some experts that say that only a company with Elaine Wynn in charge can save the brand.

“She had as the same vision as her husband,” said a analyst familiar with the relationship. “They worked side by side developing the Mirage properties and later the Wynn resorts. She’s the victim. Who wouldn’t want to put her in charge?”

The company went a long way toward untangling its fortunes from the Wynns via an out-of-court settlement reached earlier this month with Tokyo-based machine gaming giant Universal Entertainment and its Aruze USA subsidiary that removed Universal founder and former Chairman Kazuo Okada from what had been a three-way battle over the shares.

Okada co-founded Wynn Resorts with Wynn and bankrolled its 2002 IPO in return for 20 percent of the stock, which he indirectly controlled through Aruze USA, and a seat on the board as vice chairman. Through the divorce agreement with Elaine, Steve Wynn was able to offset Okada’s potential to exercise a controlling voice over corporate policy, and Okada was a party to the Wynns’ agreement. But then he and Wynn fell out with each other over the former’s desire to develop a Wynn casino in Manila, which Wynn opposed. Okada pursued the project independently, but in 2012, when affiliates of Universal were implicated in the Philippines in a bribery scheme related to the project, he was ousted from the Wynn board and his shares forcibly redeemed at a massive discount. Okada denied any involvement in the scandal and contested the share seizure in a lawsuit that was scheduled to go to trial in state court in Las Vegas next month. But the case was rendered moot when Wynn announced on March 9 that it would pay Universal and Aruze a lump sum of $2.4 billion, including interest, as compensation for the seizure.

Okada was not a party to that agreement, having been removed as chairman of Universal last year on charges that he misappropriated corporate funds. He is contesting that as well in court and if victorious could regain control of a private company that owns around two-thirds of Universal’s JASDAQ-listed stock.

Indications last week were that he would also seek a temporary restraining order blocking the settlement between the Wynns but then appeared to change his mind after Wynn Resorts voluntarily withdrew a counter-suit against him alleging breach of fiduciary responsibility in connection with the bribery case in the Philippines.

The Wynns’ settlement could put enough of the stock in play to render the company a takeover target, an issue that was addressed last week in a CNBC interview with Matt Maddox, a longtime Wynn Resorts executive who succeeded Wynn last month as CEO.

In denying any knowledge of Wynn’s alleged misconduct he also told the network that company not received any offers from prospective buyers.

“As a CEO, I have fiduciary duty to entertain anything. But what I can tell you is we’re not for sale. There’s been talks about breaking the company up: that also makes no sense,” he said.