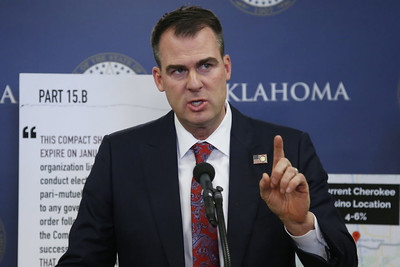 Oklahoma Governor Kevin Stitt recently announced he will not appeal a federal court judge’s ruling that the state’s tribal gaming compacts automatically renewed on January 1. Stitt said, “While I have chosen not to appeal this decision, I believe that the people of Oklahoma will demand a fair deal that benefits all 4 million Oklahomans.” He added he anticipated working with the state’s congressional delegation, other state officials and tribal leaders “to create an environment of fairness, clarity and unity.”

Stitt maintained the 15-year tribal gaming compacts expired on January 1, while tribes said they automatically renewed. Stitt had been seeking higher fees from the tribes in exchange for operating Class III gaming in the state. They pay 4 percent to 10 percent of revenue under the compacts. Stitt said Class III gaming would be illegal without a new compact.

Three of the state’s most powerful gaming tribes sued Stitt in U.S. District Court for the Western District in Oklahoma on December 31, seeking to clarify that the compacts automatically renewed. Several other tribes later joined the suit. In July, U.S. District Judge Timothy D. DeGiusti ruled in favor of the tribes.

The state has paid more than $1.5 million in legal fees to fight the tribal gaming compacts, according to figures released earlier this year.

One reason Stitt decided not to appeal DeGiusti’s ruling over the compacts is, “Our state is facing unprecedented uncertainty as a result of the U.S. Supreme Court ruling in McGirt v. Oklahoma,” a landmark U.S. Supreme Court decision involving tribal jurisdictional issues. “Therefore, it is essential for state and tribal leaders to join together to resolve the challenges this ruling presents for Oklahomans and their businesses,” he said.

In the meantime, the Comanche Nation and Otoe-Missouria Tribe said they will continue to operate under the 2020 gaming compacts they negotiated with Stitt’s office. Tribal officials said they believe the Oklahoma Supreme Court intruded on federal and tribal jurisdiction in its September 15 denial of a rehearing requested by Stitt about the validity of those gaming compacts. Attorney Rob Rosette, representing both tribes, said the casinos will continue to offer Class III gaming under the compacts. “That’s our legal position,” Rosette said.

He added neither tribe will offer house-banked table and card games or sportsbook betting, as allowed in the compacts, unless they are legalized by the Oklahoma legislature. Also, the tribes will observe the 4.5 percent exclusivity fee under the new compacts, not the higher 4 percent to 10 percent sliding rates paid by other tribes under the 2005 compact agreement, which automatically renewed on January 1.

Because they’re paying the lower rate, the Comanche Nation and the Otoe-Missouria Tribe, along with Stitt and U.S. Secretary of the Interior David L. Bernhardt, have been sued by the Cherokee, Choctaw, Chickasaw and Citizen Potawatomie nations. All Oklahoma tribes agreed to the same exclusivity terms that took effect in 2005.