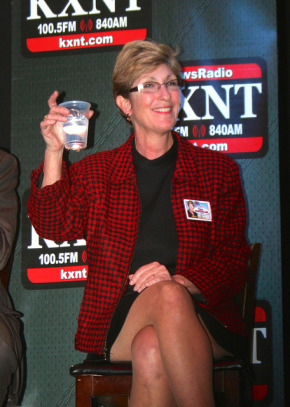 A Nevada Supreme Court ruling issued just days after the October 1 mass shooting on the Las Vegas Strip appears to expose MGM Resorts International to significant liability for the massacre, which left 58 dead and more than 500 injured.

The case stemmed from an assault in 2010 on a California couple inside MGM’s New York-New York casino hotel. The couple sued the resort, but a lower court dismissed their lawsuit on the grounds that the property had no knowledge the attack would occur.

But a three-member panel of the high court overturned that order in a 2-1 ruling that says New York-New York should have known the attack was foreseeable because there had been similar incidents of violence there. Evidence in the case showed there were three fights a week at the resort.

“You no longer have to show the exact circumstance was foreseeable,” said Craig Drummond, a lawyer for the couple. “I think it makes it difficult for MGM Resorts to get the Mandalay Bay case dismissed by arguing it’s a lone shooter and they couldn’t have ever foreseen that.”

Attorney Robert Eglet, a former president of the Nevada Trial Lawyers Association, agrees, telling the Las Vegas Review-Journal the decision opens the door for plaintiffs to question whether MGM had sufficient security measures to protect its guests and those at the Sunday evening outdoor concert that was riddled with automatic weapons fire by a lone gunman firing from a suite on the 32nd floor of the company’s Mandalay Bay in the worst mass shooting in U.S. history.

“I think it broadens the scope of the things a judge has to look at to determine whether this event was foreseeable,” Eglet said. “In other words, it’s no longer, ‘Has anything like this ever happened at Mandalay Bay?’ It’s, ‘Has anything happened like this anywhere?’”

But Jean Sternlight, director of the Saltman Center for Conflict Resolution at UNLV’s Boyd School of Law, said Mandalay Bay still has a strong defense under state law.

It’s expected that MGM and Mandalay Bay will be bombarded with lawsuits stemming from the massacre, and their lawyers are already preparing a defense, which Sternlight says will likely argue that it was unforeseeable that a guest would bring a large number of high-powered rifles into the resort and shoot at a concert across the street.

“I think the victims will have a challenging time trying to prove that Mandalay Bay failed to exercise due care in protecting the concertgoers.”

The company, however, isn’t so sure, and has already asked the entire Supreme Court to review the New York-New York ruling. Its lawyers say the ruling “eviscerates” a state law that protects businesses” and has “significant implications beyond just these litigants.”

But reversing it could spark criticism that the court is trying to protect the powerful casino industry, Eglet said.

“I don’t think it would pass the smell test,” he said.

But Steve Morris, who defended MGM in the 1980 MGM Grand fire in which 87 died and more than 700 were injured, said it may still be more difficult for victims to blame the company in the mass shooting case.

“Here you have an abhorrent actor who just happened to be in the hotel,” Morris said. “The guy took a hammer, knocked the windows out and started shooting people. It’s not an act by the hotel.”

Will Kemp, a veteran lawyer on the plaintiffs’ side in the fire litigation, agreed it’s an argument that’s hard to ignore.

“They’ve got the shooter committing an intentional act that they can argue was not foreseeable,” he said.

Eglet, however, believes there is a point where the comparisons break down. “This wasn’t just an accidental fire because of negligence or product defect that hurt a lot of people. This was a direct attack on our city. And so I think everybody collectively feels that anxiousness, that anxiety and that distress over this happening to us.”

Certainly with the approach of the holiday season security is uppermost in the minds of the gaming industry and government both.

The Nevada Division of Emergency Management-Homeland Security has requested $340,000 in funding, nearly triple the usual allotment, to protect tourists during the popular New Year’s Eve celebrations, which drew more than 350,000 visitors to the city. Plans are to deploy busses as roadblocks to deter potential terrorist attacks and 348 National Guard troops will man 22 separate locations. Normally, around 160 are dispatched.

“After October 1, we all agreed we needed to relook at that and give it a different look based on new analysis from that (shooting) event,” said division head Caleb Cage.

In addition, soldiers will be in place longer.

“Instead of being there the day before, the day of and the day after New Year’s, which has been the case in the past, they’ve got the request staggered over about a five-day period,” Cage said.

The five-day presence will cover the entire long weekend as well as the start of the huge CES 2018 convention.

Clark County Commissioner Chris Giunchigliani wants to entirely ban private vehicles from the Strip from Mandalay Bay to the Stratosphere, claiming the processions of cars, a hallowed Strip tradition going back decades, cause traffic jams that make it difficult for police, fire and paramedic vehicles to quickly respond to emergencies.

She suggests that only pedestrians, buses, taxicabs and ride-hailing companies like Uber and Lyft be permitted on the neon roadway.

Giunchigliani, an RTC board member, said she hopes her idea will be included in the study.